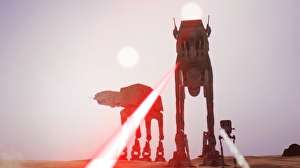 If there are two things I like on this Earth, it’s Star Wars and Fallout: New Vegas, so you can imagine my excitement when I found out about this mod.

Made by Tank_Girl444 and Karim Najib, Star Wars: Open Worlds is a total conversion mod for Fallout: New Vegas. It seeks to create 12 galactic planets for players to explore, complete with their own environments, stories and characters. It’s been in progress for at least three years, but received significant attention earlier this week when it was spotted by YouTuber JuiceHead. And it looks like the modders have put those years of development to good use, as there are dozens of videos displaying their progress so far.

The most recent showcase, which you can find below, explores a toxic planet called Felucia (which briefly makes an appearance in Star Wars: Revenge of the Sith). There’s plenty of other videos showing everything from AT-AT battles to a ship travel system, so it’s well worth browsing the channel if you’re interested.