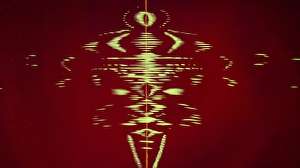 There’s a fascinating moment in Disney’s Fantasia where Deems Taylor invites the soundtrack onto the centre stage. This is the flickering line that carries the movie’s audio, and with Disney’s animators in charge it starts to ripple and splatter as music rushes through it. Spirograph curls and lily pads drifting across the surfaces of ponds, writing their own wakes. And then it’s over and back to the main event.

I haven’t seen Fantasia in about 30 years, but I still think of that moment every time I bend my head forward, which is quite often, all things considered. When I bend my head forward, I get a blast of energy rushing down my spine. It’s a friendly thing for me, a warm jolt, but as it burns out in my ankles, I almost see that dispersing, collapsing wave rush of the Fantasia soundtrack. It’s a symptom – in my case of a lesion on the spine, highly indicative of multiple sclerosis – but it’s almost a musical instrument. I can bend my head forward and back, and I swear the rush of electricity responds to this, as if I’m moving my fingers over cello strings, or sculpting the thick, mineral air around a Theremin.

Invisible and ever-present, this is one of the private, wordless travelling companions of neurological disease. The sensation is sometimes known as Barber’s Chair Syndrome, because you trigger it by moving your head forward, your chin towards your chest. But its proper name is Lhermitte’s sign. For years I was fascinated by this name because in its careful, studied wrongness, it seemed emblematic of so much of the dazzling, disconcerting, tricksy world of neurology. Wrong because Jean Lhermitte was not the first to discover it, and not even the first to properly describe it. Doubly wrong – I still don’t understand how this bit stuck – because it’s not a sign but rather a symptom. A sign would be observable to people other than me. That’s my understanding anyway.