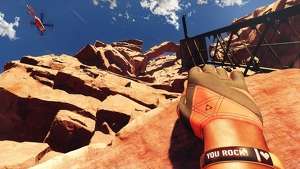 2020 was a strange year for us all but, speaking personally, I didn’t have “start to appreciate rock climbing” on my bingo card. You’d have never caught me doing it; heights are not my friend and that’s especially true outdoors. When that cold wind hits, consider me gone. Actually, that might explain this new fascination with climbing athletes, who wouldn’t even blink at the sudden chill. With no means (or will) to try rock climbing directly, I took a different approach. I bought Crytek’s The Climb.

Having gotten an Oculus Quest 2 last month, games were needed for my fancy new tech. Granted, a Quest port of a four-year-old Oculus Rift game is an odd choice, considering it didn’t even launch with motion controls initially, but it set a high bar early for what VR could offer. Back in 2016, modern VR was finding its feet and VR games felt more like tech demos, not full experiences – a situation which has long since improved.

For game design, strength lies in simplicity and The Climb executes its concept well, utilising an extreme form of free solo climbing to advance. For the unaware, free soloing is a niche of its own in climbing circles, practised by very few athletes. Making their climb without protective equipment like ropes or harnesses, you can immediately see why. Despite being an incredibly dangerous approach, it translates well into a video game.