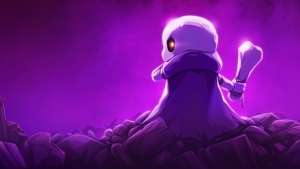 Bertie: Oh I’ll just give it a quick go… An hour-and-a-half flies by. I am in love.

Skul is a bit like Hades but viewed side-on. It’s an action-based Rogue-lite where you get one life to see how far you can get. You’re not escaping a mythical underworld, but you are on a team traditionally viewed as the baddies, the demons, and you’re fighting the heroes. Specifically, you’re a skeleton, but more on that later because it’s important. As you fight, you collect power-ups and abilities, and, at intervals, there’s a shop where you can spend currency to either heal or buy further power-ups and abilities. See what I mean? Quite Hades-like.

But! And here’s where we get back to the skeleton part: because you’re a skeleton, you can take your head off and put another one on, and when you do, you become whatever that head was. Was it a sorcerer-like head? Become a sorcerer. Was it a thief’s hooded head? Become a thief. Was it a warrior? And so on. And each of those heads represents a different set of abilities and moves.