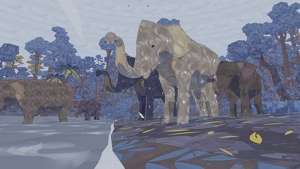 Developer Might and Delight has released a first gameplay trailer for its open-world nature sequel Shelter 3, which this time casts players as a mother elephant who must protect her calf, and indeed the entire herd, from harm.

Despite the change in animal (Shelter 2 followed the adventures of a lynx and her cubs, while the first game starred a family of badgers), Shelter 3 follows a similar structure to its predecessors. There’s a large, open world to explore as you lead your herd across the savannah, hunting out new pastures while avoiding countless natural dangers, from crocodiles to tigers. You’ll find some of that in Shelter 3’s first gameplay trailer below.

“Help the matriarch by choosing the best route to keep your herd well fed and safe from harm,” explains Might and Delight. “You’ll use ancient knowledge to navigate, gaining wisdom as you do so. As an elephant you’re not a predator but prey, so you’ll need to steer clear of beasts in the bushes at the same time as avoiding starvation…Your journey will be scattered with special moments as you discover new terrain and untrodden pathways, but grief will also play its part.”