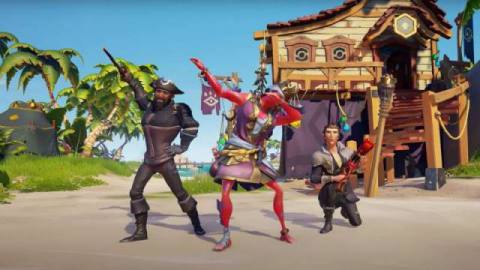 Rare announced seasonal progression was coming to Sea of Thieves during a big December update, and now we’re on the cusp of it kicking off. Season One sets sail on January 28, and for the next three months, players can engage in new activities to earn exclusive rewards, both free and paid. Rare also released a helpful primer video detailing exactly how seasons to give players a (peg) leg up before the festivities begin.

Seasons introduce Renown, a new progression currency that is earned by simply engaging in existing activities, such as sailing and combat. Over 100 levels of Renown await eager explorers, each containing its own rewards including gold and cosmetics. Trials offer a faster, more focused method of earning Renown by presenting specific goals (like setting a skeleton on fire) for players to pursue. Seasons last three months and feature daily events, new feats, as well as regular quality-of-life improvements. All of this is free to players. For high-rolling pirates, the paid Plunder Pass grants 11 exclusive Pirate Emporium items, which remain exclusive until that season ends. Then, those items will be available for purchase separately.

Sea of Thieves has come a long way since its shaky launch in 2018, and adopting the popular season model feels like the next logical step. When done right, seasons have proven to be a compelling hook that keep players engaged with a game, so here’s hoping Rare can knock this out of the park. For more on Sea of Thieves (and context for how far it’s really come) check out our review of the game from its launch.