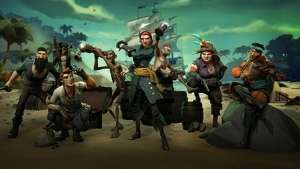 It’s all change on the Sea of Thieves starting in January next year, as Rare’s piratical multiplayer experience goes the way of countless other online games, adopting a new battle-pass-style progression system and new Seasons content release model.

Before all that, though, there’s some disappointing news for fans of the PvP-based Arena mode; Rare has announced that all future Sea of Thieves updates will focus on expanding the game’s more popular Adventure mode, meaning that while Arena mode will still be available, all development will cease – a sad fate for what started out as a brilliantly chaotic, rapid-fire alternative to the core game, but one that struggled to overcome myriad technical issues and, later, an unfavourably streamlined reworking robbed of the original’s adventuring spirit.

That, then, firmly places the focus back on Adventure mode, and the debut of Rare’s new Seasons model in January. As explained in its latest video update below, each season will last approximately three months (previously, Rare aimed for monthly content updates), and each will begin with the introduction of “a new experience or way of play”.