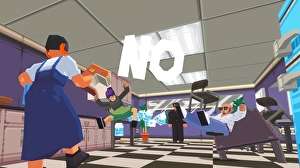 Say No! More understands the modern office as a cheery place where awful things happen. Colleagues steal interns’ lunchboxes. People are made to work in unloved corners, beneath ductwork. Everyone wants you to fix the copier or make coffee or just be a bit more entertaining. Into this terrifying world, the game has a very simple solution. No.

Being a prat means that I pretty much have to remind everyone that Say No! More is in good company here. Bartleby, the Scrivener, a short story by Herman Melville, covered this ground in the 19th century. Bartleby works in an office and finds himself increasingly unwilling to do the things asked of him. This approach leads to him losing his job and eventually ending up in jail. Once he’s of no use to the industrial flim flam of the day, he pretty much dissolves. Bartleby’s classic line, I would prefer not to, is a masterstroke of course. So hard to counter, so nuanced, no easy handholds for someone to grab it and toss it aside. That was the nineteenth century version anyway. Today we get NO! And NO! is accompanied by entertaining violence.

Say No! More is on rails. You race around the office as the story develops, jabbing a button to say NO! at everyone who comes your way. Sometimes it knocks them out of the way. Sometimes it knocks them through a window. Sometimes you need to laugh first to weaken confidence before saying no. Sometimes you need a charged no, or an icy no, or a no accompanied by handclaps. This adds a bit of depth I suppose to a game that doesn’t really need depth. Instead it’s spectacle – you rush onwards and onwards, shouting down everything that comes your way.