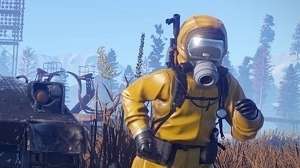 If you hadn’t yet noticed, Rust is having a bit of a moment. Although it’s been around since 2013, the survival multiplayer is experiencing a resurgence in popularity after a bunch of high-profile streamers set up private server together. The streamers, including Shroud, Pokimane, Myth, XQc and more, have all uploaded their own perspectives of the island (even creating their own factions), making for compelling viewing – and seriously boosting Rust’s player count in the process.

Prior to the recent surge in popularity, Rust’s previous Steam concurrent players record stood at 125k in April 2020 (coinciding with coronavirus lockdowns), but on 8th January it smashed that record by peaking at 201,497 players. The numbers have continued to rise over the last week, and as spotted by PCGamesN, the game hit 244,394 concurrent players on 16th January – breaking that record yet again.

All this, of course, seems to be paying off very nicely for Rust developer Facepunch, with studio founder Garry Newman revealing the studio had made over $1m (£734k) on two days in one week. With the player count showing no sign of declining, I imagine this is going to be an extremely good month for the game. And we haven’t even had the Rust console launch yet.