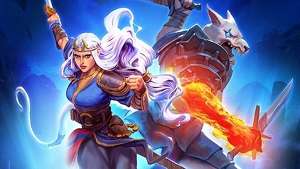 There’s a confidence to Roguebook I really like, which I suppose I should expect from a new game by Magic: The Gathering creator Richard Garfield. It’s not just in the presentation of the game, though that certainly helps – it’s crisp and clear and colourful and characterful – but in the brand of strategy it offers underneath. This is a game made of familiar components and yet it feels satisfyingly new.

The overwhelming inspiration is Slay the Spire, that much is obvious. Not only is it a Roguelike deckbuilder, it goes as far as to copy the Strike and Defend cards in your opening deck. But I think we can probably consider Slay a template for the genre at this point anyway, so let’s move on, because it’s in the differences where Roguebook becomes interesting.

In Roguebook, you see, you don’t control one hero but two. And each of these heroes has their own cards that make up your deck. In order for them to attack, you have to play their specific attack card, and the same goes for blocking. However, block is shared between characters, which means whichever character stands at the front, at turn’s end, gets the benefit of the block. This is important, because it’s the character standing at the front who takes damage. Positioning, therefore, is vital.