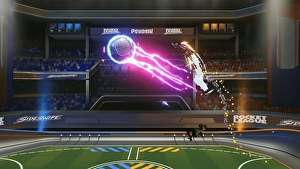 Sideswipe, which has been “built from the ground up for mobile”, promises to deliver the competitive car-based football action of the original Rocket League, albeit with number of changes intended to make the experience more palatable on mobile devices.

Matches are now two-minute-long 1v1 or 2v2 affairs, for instance, played out using touchscreen controls and a new side-on perspective.