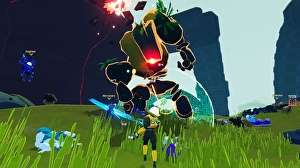 Risk of Rain 2’s Anniversary Update – which launches this Thursday, 25th March – is intended to “flesh out and round out the base game”, revisiting old items and finishing up content that didn’t make it Hopoo’s version 1.0 release.

For starters, it introduces a previously scrapped Survivor known as the Bandit (Hopoo notes the scrapped version, which has since been revived by modders, will continue to work alongside the new iteration), as well as an abandoned boss referred to as the Grandparent.