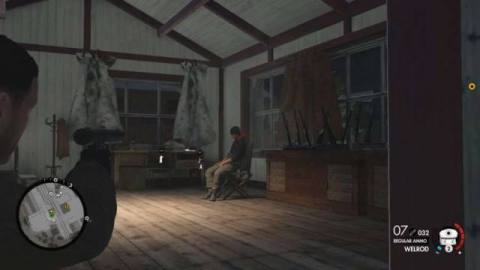 Rebellion’s Sniper Elite 4 was released to some high praise back in February of 2017, and is widely regarded as the best entry in the long-running series to date; it’s a fun and flexible sniper’s paradise with ten lengthy campaign missions set across the largest, most varied and vertical levels that crack Nazi skull-exploder Karl Fairburne has ever had to contend with. There’s plenty for ace-assassins to chew on in this one, with a hefty fifteen-hour story that’s fully playable in both solo or co-op and a variety of multiplayer modes, all of which arrives here on Switch in fine form. This is a port that is easily equal to its predecessor with nary a bug or framerate drop in sight, leaving you free and unfettered to get right down to the very important business of slo-mo smashing fascist’s jaws through their lungs in glorious X-Ray vision.

Sniper Elite 4 picks up in the immediate aftermath of the events of the third game in the series, with gruff central protagonist Fairburne landing in Italy to investigate a mysterious Nazi weapon. No sooner have Karl’s leaden boots landed on the soft sand of San Celini than a plot involving desperate resistance groups, giant railguns, the Sicilian Mafia, backstabbing, double-crossing and enormous Nazi facilities begins to unfurl. This is easily the biggest Sniper Elite to date, with impressively large levels in which to get down to the rather worryingly addictive business of making an absolute mess out of your fascist foes. 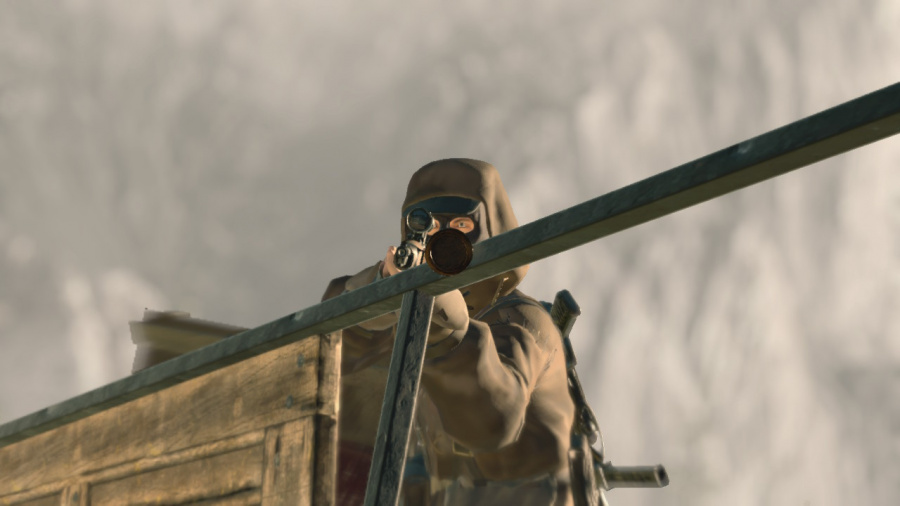 The core gameplay remains much the same as previous efforts in the franchise, with Fairburne’s main party piece – the slow motion, X-ray destruction of heads, hearts, lungs and other quite delicate areas of anatomy – still very much the centre of proceedings. Choosing to stealth as much of these enormous, enemy-infested environments as possible, you’ll employ a multitude of tricks and traps; teller mines, tripwires, grenades, TNT, booby-trapped corpses, satchel charges and so on to bend your surroundings to your advantage. Beyond lining yourself up for plenty of the game’s signature slo-mo sniper shots, you can rig objects to explode, quietly shoot large crates down upon the enemy and trigger glorious chains of explosions that take out multiple Nazi troops by targeting a munitions cache or the gas tank of a large convoy vehicle.

Passing planes and loud machinery will drown out the sounds of your gunfire, enabling you time your shots and move through areas undetected, and a new addition here also sees you provided with very limited stocks of suppressed ammo for your rifle – a precious resource that enables you silently despatch the enemy as you please. If you’ve played any previous Sniper Elite game you’ll know the drill well enough, but here the fun has been added to with smarter and more reactive enemy AI and a more versatile Fairburne who can now hang out of windows or off ledges and clamber around walls and up pipes in order to get a better vantage point from which to scope out and tag enemies with his trusty binoculars. There’s a fresh level of flexibility that has the positive knock-on effect of making being discovered and “going loud” a much more viable alternative than it ever was in previous entries in the franchise. 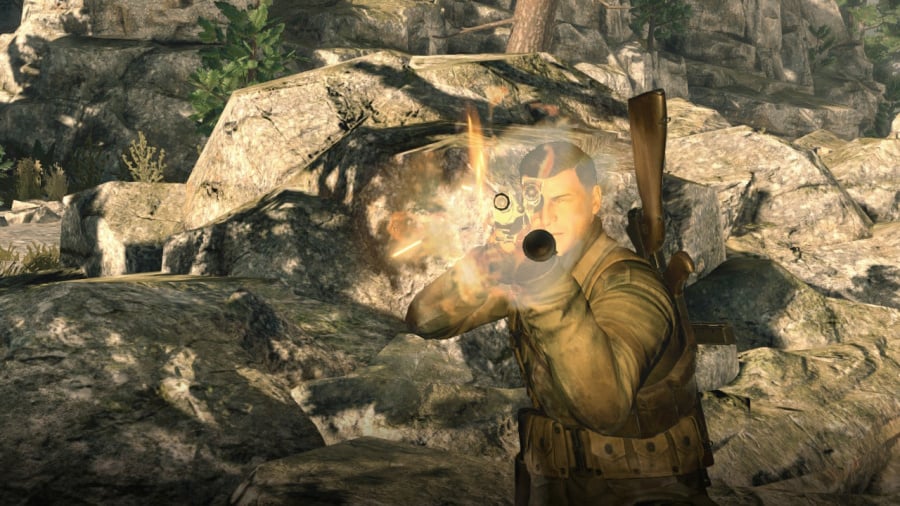 Indeed, where once we’d stick resolutely to keeping ourselves hidden at all times, save-scumming our way through tough assignments, being spotted in Sniper Elite 4 isn’t as frustrating as it was in the past. Karl has a bevvy of new moves that allow for quick and nasty CQC kills when up close and personal, and the AI is such that you can toy with your opponent, making a real ruckus, taking out a bunch of baddies with your Thompson and then quite easily – at least on medium difficulty settings – vanishing into thin air again. In fact, making a big bunch of noise here – something we were once so terrified of doing in these games – is a tactic we started to use to our advantage, drawing the enemy into our pre-planned death mazes of tripwires and traps, giving them a little tease with some automatic fire before going ghost again to mop up the scene from long-range. It’s good fun.

There are now also night time missions which allow you to snipe out light sources and, overall, this fourth entry in the franchise does a cracking job of providing plenty of opportunity for experimentation throughout its great big meaty levels. And these really are some meaty levels. You can easily spend upwards of an hour on each scenario – much more if you decide to attempt to ghost the whole thing or complete the laundry list of side objectives and collectable-gathering that’s available in each and every area. As you play you’ll rank up, earning XP for pulling off outrageous kills – there’s nothing quite like the glory of a very long range, slow-motion double headshot to make you feel like a proper hero – and giving you points to use towards locking more an more pistols, machine guns and beautiful great big sniper rifles. 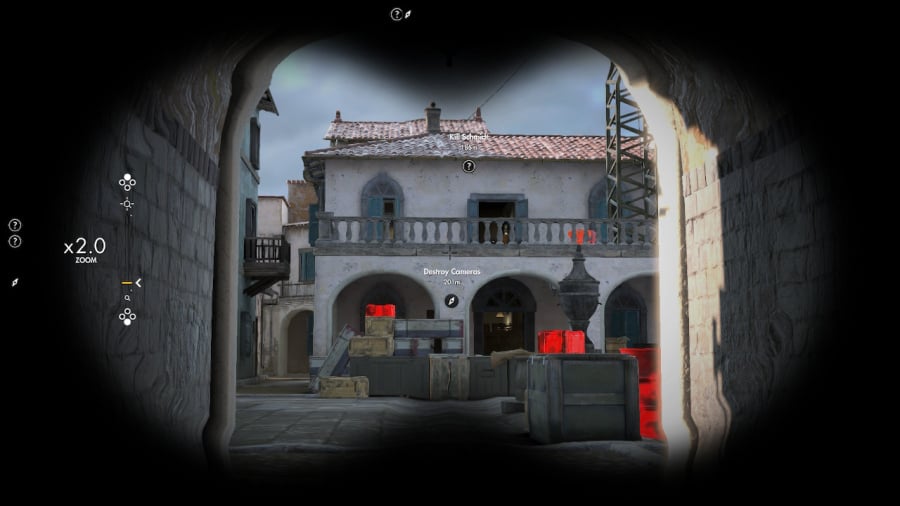 Sniper Elite 4 also gives you plenty of options with regards to fine-tuning its difficulty to suit your needs. You can make things as simple and automatic as you choose with your shots finding their targets easily, or you can have wind-speed, velocity and distance all play a huge role. The red indicator that helps you line up a shot as you hold R to empty your lungs and focus can be switched off entirely – something that really does up the ante – and the game even provides you with a shooting range where you can get to practising some completely unaided, super long-range ball-blasters.

Of course, true to series form, there are a few rough edges here and there – it really wouldn’t feel like a Sniper Elite game without some, if we’re honest – and enemies, smarter though they are, are still quite easy to manipulate into doing your bidding if you plan well in advance. The writing and characters are also still dull and forgettable, and the whole thing lacks the level polish and pizzazz of comparative titles such as Metal Gear V. This is also a supremely one-note affair that doesn’t really switch up its agenda for the entirety of its campaign, and what you’ll be doing in the first mission, you’ll be doing in the tenth in terms of gameplay mechanics. However, when those gameplay mechanics revolve around something so consistently satisfying, grotesque and hilarious as watching a Nazi’s internal organs contort and rupture in glorious X-Ray vision as he’s hurled into the air via a large explosion, it’s genuinely quite hard to complain. 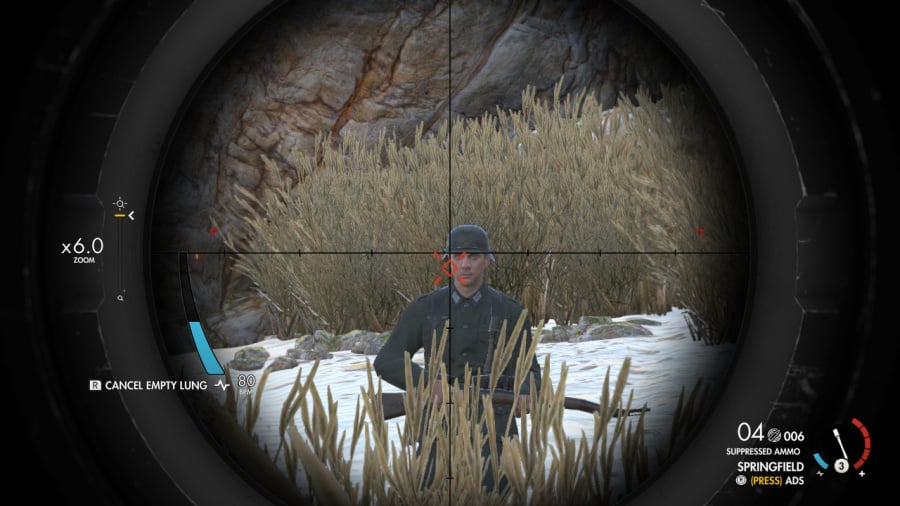 With an entire campaign playable in glorious co-op mode and a pretty hefty multiplayer suite (that we sadly couldn’t access for this review) there’s certainly plenty for eager sharpshooters to sink their teeth into here and, as we mentioned, this is a Switch port that’s every bit as successful as that of Sniper Elite 3. Those all-important gyro-controls are present, correct and perfectly implemented and performance is strong across both handheld and docked modes. Graphically there’s been a downgrade, as expected, but it’s not a particularly harsh one. This is still a very pleasant game to look at, especially in portable mode, with every single lung puncturing, skull-shattering, testicle twisting slo-mo moment perfectly preserved for your delectation.

Sniper Elite 4 is the best entry yet in this long-running franchise with great big meaty missions stuffed to bursting point with Nazis to snipe and stab in glorious slo-mo X-ray vision. There’s a new-found flexibility to the gameplay, with Karl now able to shimmy and scurry vertically around levels and enemy AI that’s much more up to the task than in previous iterations. There may be some slightly rough edges, with duff writing, naff characters and gameplay that doesn’t change much from start to finish but, overall, this is playful sniper’s paradise that lands on Switch in a truly impressive port. It’s time to dust off that M1903 Springfield, find a nice vantage point and get to blowing great big bloody holes in fascist heads. The perfect antidote to 2020.