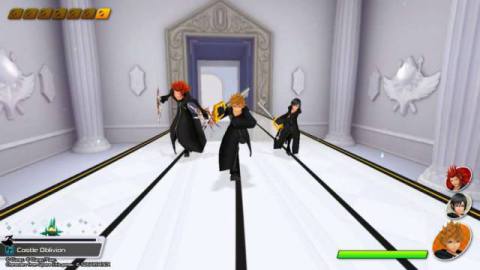 It’s hard to believe that the Kingdom Hearts franchise has been around for nearly twenty years. The odd pairing of Final Fantasy and several Disney franchises always sounded like an idea that just wouldn’t play out right, but the series has gone on to garner quite a sizable and passionate fanbase over its long run. With last year’s Kingdom Hearts III bringing the closest thing to a conclusion that the series has seen yet, Square thought it would be fitting to now release a sort of retrospective title to reflect on everything that’s built up this saga, and what’s a better way to do so than putting out a… (reads notes) rhythm game? Indeed, Kingdom Hearts: Melody of Memory is a bizarre title in an already bizarre series, but, like its stablemate Theatrhythm Final Fantasy, it proves itself to be a solid music-focused outing in its own right.

We’ll get one thing out of the way up front: yes, this game is canon. The Kingdom Hearts series has become a bit of a meme in recent years thanks to its increasingly incomprehensible plot that introduces clones, alternate realities, time travel, and plenty more confusing nonsense with each new entry, and this one is no different. That being said, the vast majority of Kingdom Hearts: Melody of Memory is centred around Kairi recapping everything that’s happened up to this point in the series. 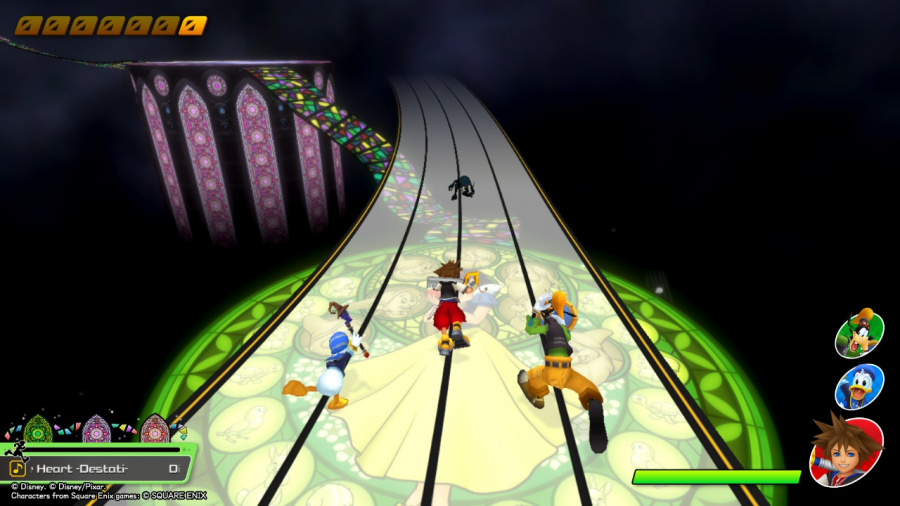 It goes without saying, then, that those of you who have fallen behind on the series lore (and still care) may want to hold off until you’re caught up, as the spoilers come thick and fast in this one. Obviously, a rhythm game isn’t usually too focused on telling a detailed narrative, and Kingdom Hearts: Melody of Memory fortunately doesn’t bog itself down much in the cavernous depths of this series’ infamous storytelling; it stays primarily focused on delivering an easily accessible and nicely addictive gameplay experience.

The gameplay vaguely mimics the core combat in the main series by having you take control of three characters running down a highway that brings a constant barrage of Heartless, Nobodies, and Unversed to smash with whatever weapon your character is holding. These enemies come at you roughly to the beat of the music, and you’re prompted to time your strikes carefully to little shrinking circles that appear over each enemy as they get near to you. Your characters run automatically and you don’t have to worry about controlling each one independently; the character closest to the upcoming enemy will attack automatically as long as you time the button press right. 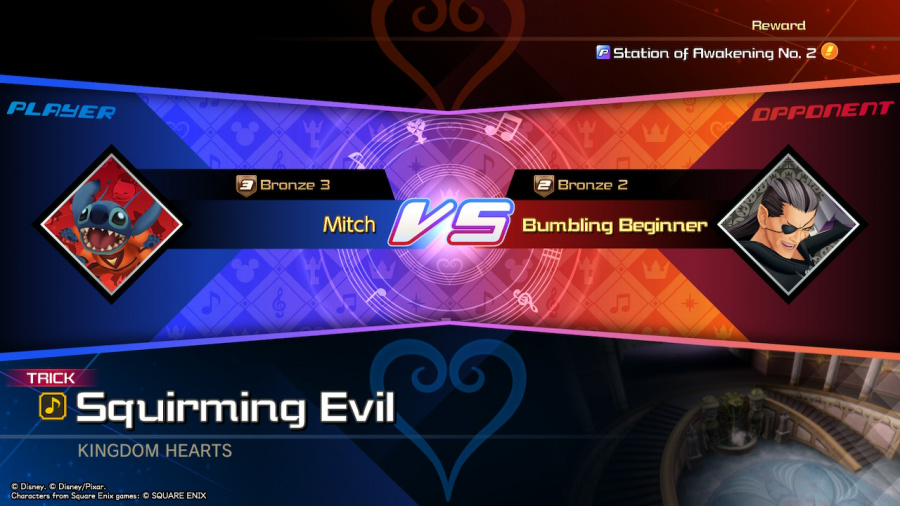 Most sections of a stage will have you just smacking one enemy at a time as they come up, but there are frequent segments that throw you a curveball to keep things interesting. For example, some enemies are airborne, meaning you have to make one of your characters jump to reach them. Sometimes multiple enemies can rush you at once, necessitating that you press two or three buttons at the same time. Such gameplay can seem almost mind-numbingly simple on the surface, but it’s the cadence and intensity of the waves of enemies that make each level so enticing. You may only have to worry about a few potential inputs in any given stage, but when a busy section of the song is coming up, it takes quite a bit of focus to make sure that you don’t miss anything.

For the most part, it’s quite intuitive to match your inputs and keep up with the music, but one relatively minor issue we experienced is that not all the music here lends itself particularly well to a rhythm action game. Kingdom Hearts: Melody of Memory pulls from dozens of Yoko Shimomura’s legendary tracks from across the series’ history, and clearly not all of these were designed around a strong beat. A track like ‘This is Halloween’ obviously fits quite well with a game such as this, but there’s an amusingly weird disconnect when the sleepy Twilight Town theme is playing while your characters are sprinting full speed down a track bringing dozens of Nobodies flying your way. 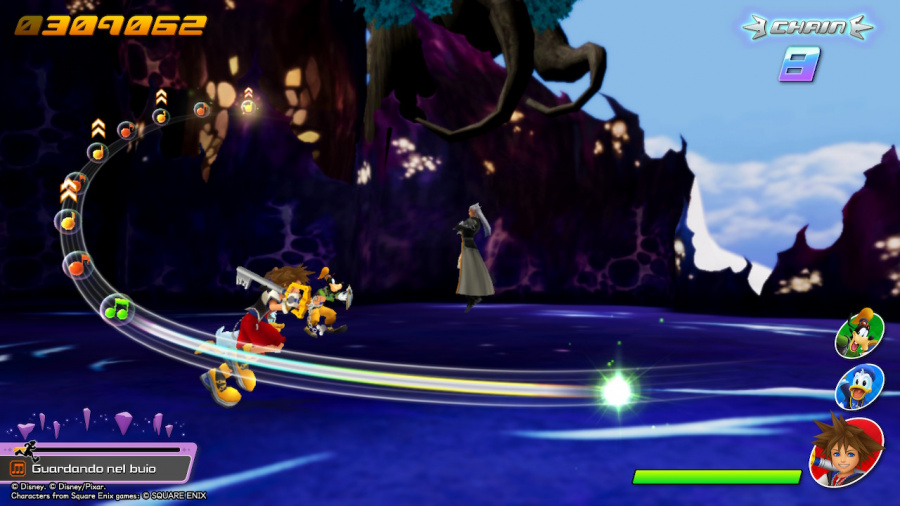 This disconnect can make some of these stages much more difficult than others, as the lack of clear audio cues to guide your inputs leaves you relying solely on the visual cues with the circles. Again, it’s not a massive issue, but there’s definitely a delineation between the levels that feel organically integrated with the action and those which feel like they were forced in due to the popularity or importance of that particular song.

There’s a rather generous window where your inputs for each enemy are accepted, and you’re given a brief rating from ‘Miss’ to ‘Excellent’ depending on how precise you were with the timing. This then affects your score at the end of a stage, which decides the overall rating that you receive for that level. As long as you make it to the end of the level, it’s technically been ‘beaten’, but there are also three optional objectives to accomplish in each stage that grant you stars required to unlock more levels. These objectives are usually pretty easy to land – asking you to do things such as killing all the flying enemies or clearing the stages without making more than a certain number of misses – but they can sometimes have devious tasks that entice you to try that stage again until you finally get it. 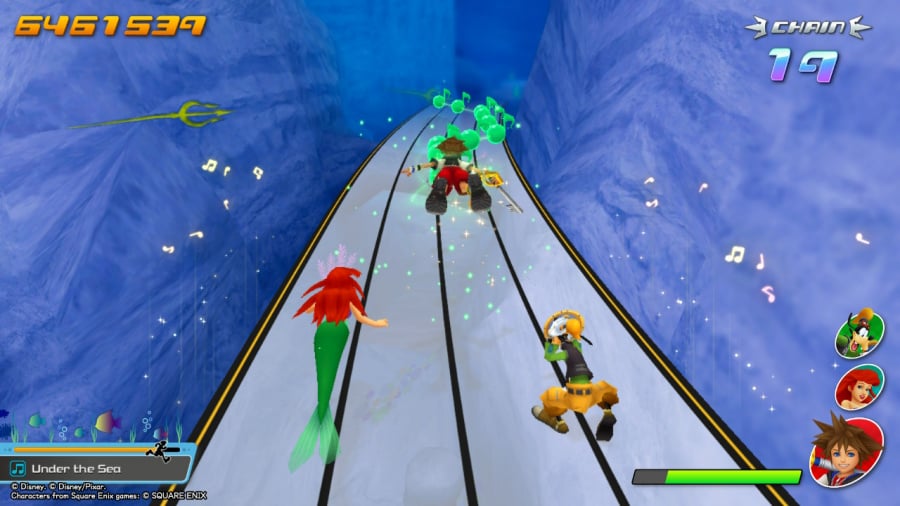 Indeed, this focus on repetition and perfecting runs is the meat of the experience. It takes a little less than ten hours to see every level on offer, but it’ll take you dozens more before you’ve truly mastered everything. Each stage has three difficulty levels that are graded separately form each other, and it goes without saying that attaining pitch-perfect accuracy on any level is sure to take you quite a few tries before you’ve memorized all the enemy placements. Completionists will find plenty to love here, then, as this is the sort of game that rewards the player who enjoys that grindy, practice-driven kind of gameplay loop.

Though it’s a rhythm action game first, Kingdom Hearts: Melody of Memory still has a few vague RPG elements to introduce a nice sense of progression. You can run one of four teams of characters at a time, and each one levels up as you clear stages with them. It’s not clear exactly why this is – only the HP stat seems to have any practical bearing on future runs – but nonetheless, it’s nice to watch your characters level up as you get deeper in. Killing enemies is sure to net you more than a few crafting drops, too, which can then be taken to the Moogle store to craft items for you.

Some of these items are practical, in that they’ll heal your HP if you get too many misses or increase the end of level experience boost, but most of them are for collection purposes. There are hundreds of collectable cards to obtain here that display art from all across the series, and it takes quite a bit of time to find them all. The Moogle can also give craft items to give you access to ‘Memory Dive’ levels, which are additional challenges that you can unlock exclusively for the free play mode. 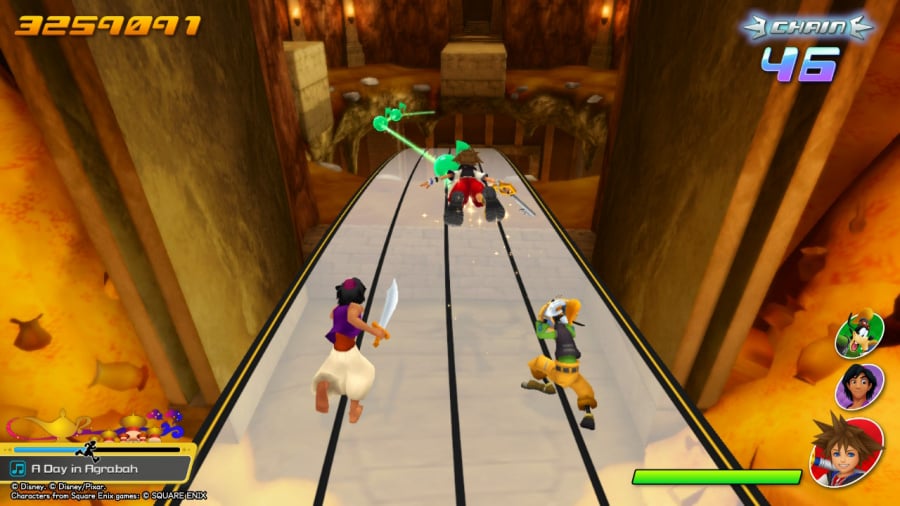 If you’re tired of playing through the story mode – cutely laid out in a world map style setting that you navigate via Gummi Ship – this free play mode acts as a master setlist where all your unlocked stages are laid out in an easily browsable form. Here, you can not only adjust the difficulty, but you can also alter the mode of play for even more variety. Aside from the default setting, those of you that want a more relaxed experience can opt for a one-button mode that greatly simplifies each stage. Alternatively, you masochists can go for a harder mode that introduces even more inputs that can massively raise your scores.

Those of you who don’t want to play Kingdom Hearts: Melody of Memory alone will be pleased to see that there’s a variety of both local and online modes for some multiplayer gaming. This acts as a way of accelerating the grind for all of those cards, and there are also separate leveling systems here for your online career that rise as you get better over time.

Head-to-head games are especially interesting, as skillful performance builds up a ‘Trick’ meter which sends over all kinds of harassment to your foe. These can do things like temporarily block their vision or send them false visual cues to throw them off, and such interruptions do a nice job of mixing up the already gripping gameplay. Plus, there’s even support for local, one Joy-Con play, which makes this an ideal title for quick pick up sessions with friends. Suffice to say, there’s a lot of content to interact with in Kingdom Hearts: Melody of Memory beyond even the lion’s share of tracks on display, and those of you looking for an economical purchase will be pleased to note that there’s plenty of bang for your buck on display. 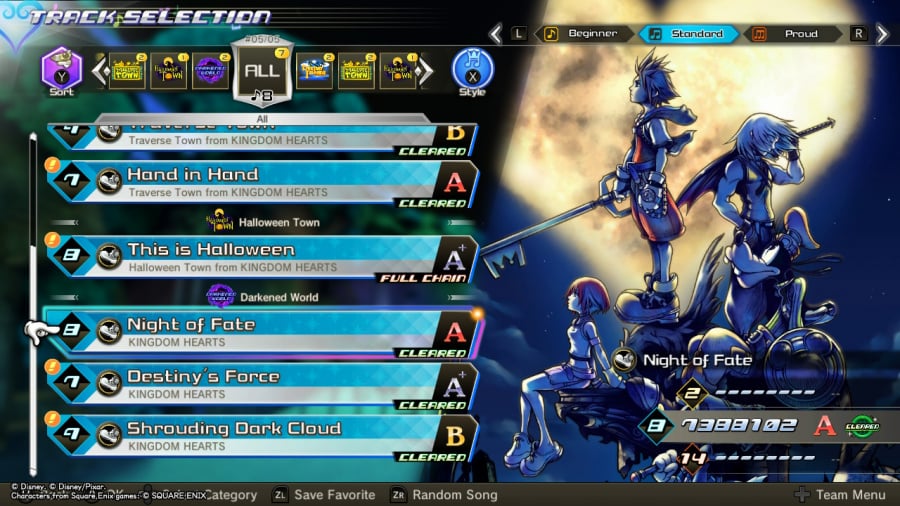 On the presentation side of things, we’re pleased to report that Kingdom Hearts: Melody of Memory looks, sounds and plays beautifully, regardless of whether you’re playing in docked or handheld mode. Character models are crisp and the frequent neon colours really have a way of popping off the screen in a way that few other Switch games can manage. We didn’t detect any frame drops at all, either, which is a huge plus considering how important precise timing is to this sort of game.

The music is truly something to behold, too, and it especially ‘hits’ differently if you’ve been with the series since its inception back on the PS2. It’s rather interesting to follow the slow maturation of Yoko Shimomura’s work through the years, as each game’s tracks remain consistent to her signature style while also bringing a little something new to build on it. Nearly every world from across the series’ run is represented here in some form, and while not all of them are equally amazing, there’s a nice balance of tracks that span a variety of genres. Again, those of you coming into this without any background in the series will of course be missing out on a lot of the emotional significance tied to many of these songs, but it still remains a solid setlist even without that context.