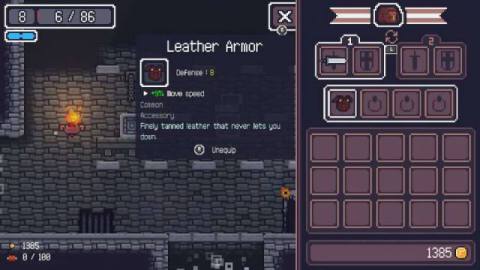 Live, die, repeat. Such is the way in roguelikes, which are experiencing somewhat of a resurgence in popularity lately, with the likes of Spelunky 2 and Hades dominating whatever remains of watercooler talk now that no one goes to the office any more. You live, making your way through dungeons, finding new weapons, beating a boss or two, and learning new things about the way things work. You die, inevitably, somewhere during your run, losing all your progress, retaining only the knowledge. You repeat, reborn back at the start, ready to make another go of it, hoping that your luck and your know-how will serve you better this time.

Dungreed is, in many ways, a rather typical game in the roguelike genre. It takes place in a dungeon, where monsters of various types will attack with various weapons. Each level of the dungeon is procedurally generated, adding an element of surprise, the player perpetually unsure of what the next room will bring – salvation, or ruin. Somewhere in the dungeon is hidden the exit, which leads to the next level, where a boss waits to be vanquished before the next level – featuring new enemies, new items, and new ways to die – is accessible. 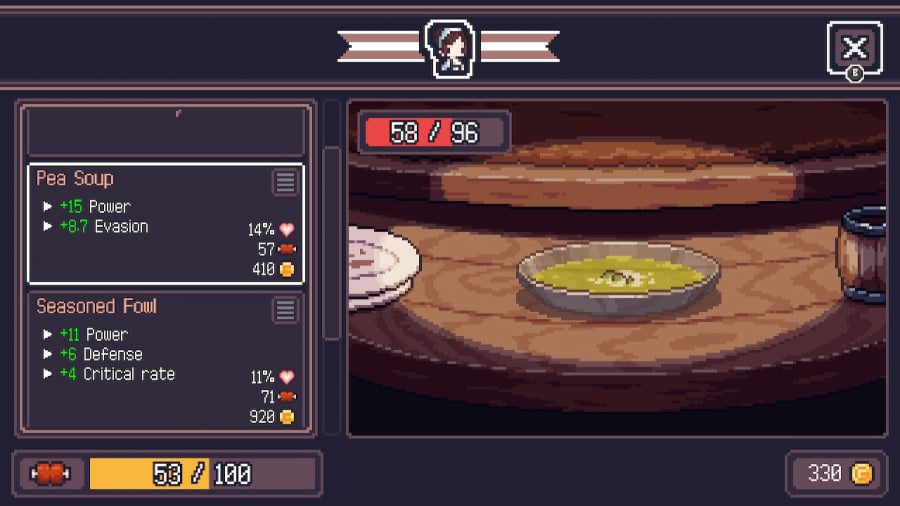 But Dungreed is actually a “roguelite”, in which your progress is not entirely lost – there is a measure of persistence. In Dungreed’s case, it is both money (albeit capped according to your level) and your experience. Both are valuable resources in preparing yourself for the next run; money can buy you weapons before you enter the dungeon, and experience means points to spend on a skill tree that will up the chances of survival.

The player will always begin with the same rubbish sword, but will quickly acquire new weapons – and new ways to play – by ploughing through the dungeon’s rooms. These range from bigger swords, to bows and guns, to rare weapons that deal huge damage at the cost of speed, or weapons that have useful and unique buffs. It’s up to the player which weapons, and which stat-boosting accessories, work best for their playstyle – and there are a lot of options.

Also in the dungeon are slightly more friendly additions, and this is where Dungreed starts to come into its own. The occasional appearance of a shopkeeper, ready to trade your ill-gotten gains for new weapons and accessories, is fairly standard, but the inn – where players can buy food – is unique to Dungreed. 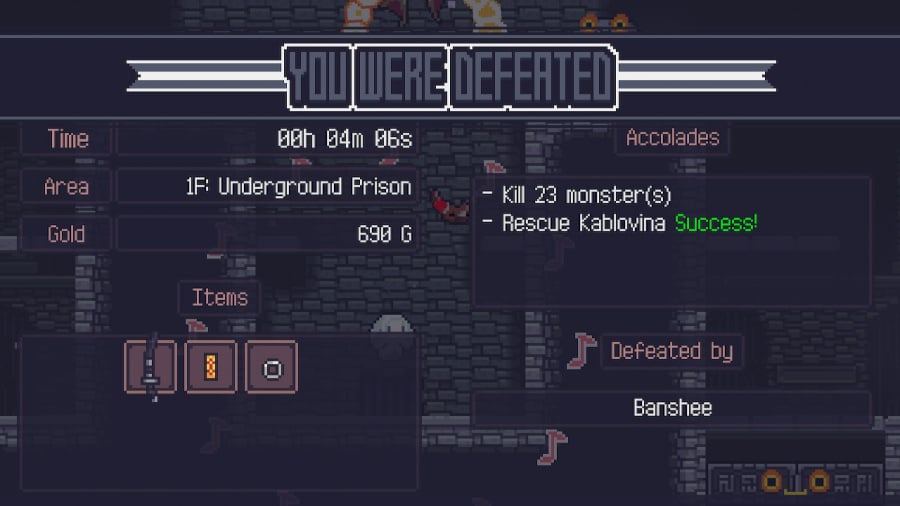 At the beginning of each run, the player will have 100 “Fullness Points” to spend on meals, with most meals costing between 50 and 70 points. Going through a door into a new room will spend these points slowly, allowing for more food, so it becomes a careful balancing act of trying to find the inn as soon as possible and monitoring the Fullness level so that more food can be consumed. Each meal has different benefits, ranging from extra defence and power to additional evasion and block – and each also costs a different amount of money, Fullness points, and heals a percentage of the current max HP, making it an interesting challenge to weigh up the benefits against the various costs each time.

Smaller and less frequent rooms offer various opportunities, too; the chance to trade in items for a new, randomly-chosen one; the offer to take a mysterious deal with unknown benefits; or a choice of four items, completely free. These rooms are always exciting to find, as they can completely change the feel of a run – and the player’s luck.

As with many games of any genre, though, the first few hours are a real chore. Underpowered and not yet equipped with any useful knowledge, the player will find the Live-Die-Repeat game loop is more about the “Die” and “Repeat” parts for many runs before they start to unlock useful stuff. Hidden in the dungeon are villagers who need to be rescued, and although the first couple (found on level one) are relatively fast to find, the rest are locked behind the game’s first boss, Belial, who is punishingly hard until suddenly, with the right weapons, he isn’t. Progress will be horribly slow for at least a couple of hours, and then it will come all at once, when a great combination of weapons, accessories, and luck magically combines. 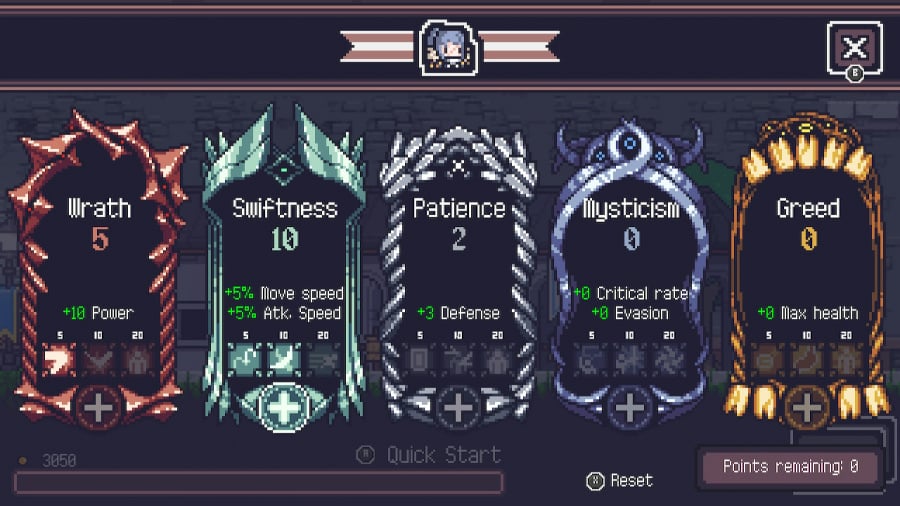 The main problem – at least for some – is the control scheme. Dungreed is sort of half-heartedly a twin-stick game, meaning that the jump, attack, and dodge buttons are all on the triggers and bumpers. For those familiar with twin-stick controls, this may not be a problem, but for those expecting the face buttons to be where jumping and attacking are found, like most games, it can be frustrating to begin with. Luckily, Dungreed lets you remap the controls, so this problem only needs to last as long as it takes to try out the settings menu.

In fact, Dungreed has been designed with ultimate ease in mind, and it’s one of the game’s greatest strengths. The developers have clearly taken notes on what works, what doesn’t, and what players need when playing roguelite games, and have made concessions and design decisions that smooth over a lot of the bumps, letting the game shine through without them.

Once the player dies, they are booted back to the main town, and just holding down the A button will allow them to jump right back into the dungeon, with the quick option of buying stuff from the shops they’ve unlocked. Fast travel within the same town will also let them jump around the shops easily and quickly – no one plays these games for the tedium of walking from place-to-place, after all. Even the persistent upgrade system is easy to use, with a completely free reset that allows the player to try different allocation of experience points for a different style of play. 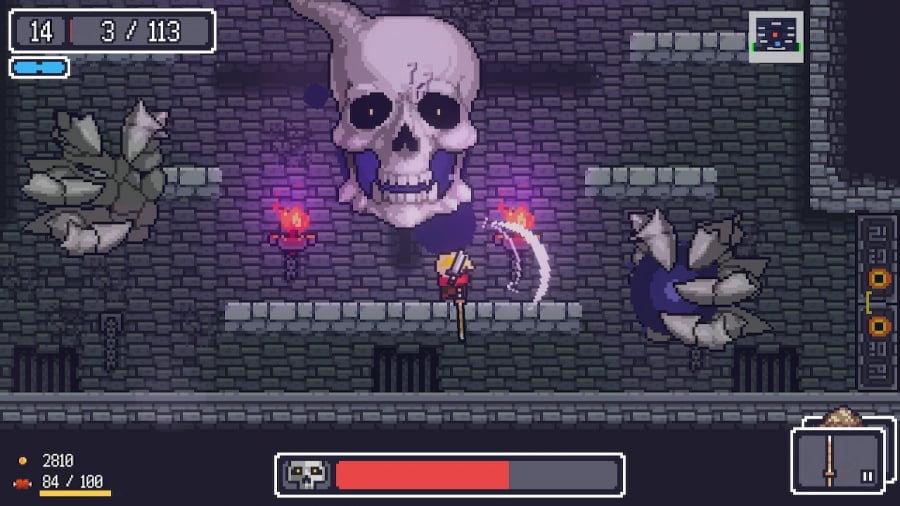 It’s fantastic to be able to fiddle around with these things at no cost, and it’s clear that the developers knew that the real joy in roguelites is not in gathering resources to pay for upgrades, but instead in trying new things, experimenting, and feeling the joy and power when it all works out. Dungreed may begin slowly and take a while to reach speed, but once it does, it’s a fantastic and thoughtfully-made game that serves roguelite fans extremely well.