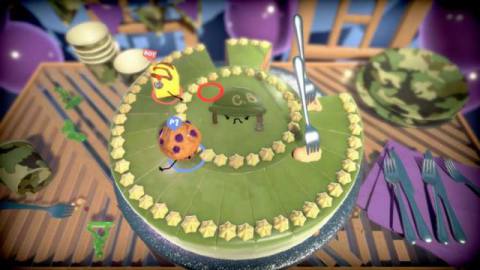 The majority of people, young or old, would be forced to concede that cakes are delicious. Nobody dislikes sweets, and anyone who did would rightfully be cast out from society and forced to live in some sort of modified bin. It’s a canny move, then, to make a game about said desserts. It guarantees at least a 5/10 from any intellectually honest reviewer. See a cake, lock those five points down.

Cake Bash immediately lands itself in a fortuitous position for being entirely built around confectionary. It’s a party game that thrives in local multiplayer, but online play is available, too. You play as a choice of delicious sweets that have come to life, battling amongst yourselves to be the best, most appealing treat. This necessitates a series of knockabout minigames, tailored for maximum madcap multiplayer.

Sensibly, each of these games essentially pivots around the same set of inputs – move, attack, dash and throw. The game feel isn’t entirely unlike Dreamcast classic Power Stone, but the goals are very different. One will see you picking up and throwing fruit into a flan, with the winner being the cake who – naturally – managed to get the most on said tart. 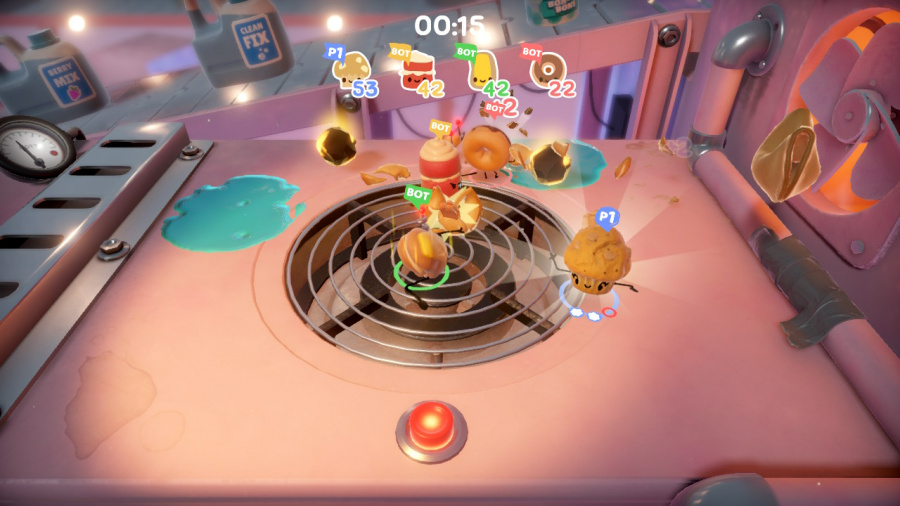 As fruit drops from the sky, it’s a mad dash to grab and toss it, but even when you’re first to get to the strawberries you can still take a hard slap to the face and drop them. Eggs rain down, leaving sticky albumen to slow your roll, pun intended. A lollipop can be wielded as a powerful bludgeon to temporarily daze a participant. And you don’t even want to know how wild things get when a golden, high-scoring strawberry makes its appearance.

And that’s just one of the rounds, but they all have a similar theme – the aim is never a straight-up fruit punch session (pffft!), but rather that you use your pastry pugilism to buy some time to enact whatever the goal of the mission is. There’s one that sees you covering yourself in as many jelly beans as possible, but taking hits causes them to fly off all over the place, allowing other players to steal them. There’s also an absolutely raucous game that sees you battling to hold onto a sparkler for the longest, which is nothing short of delightful to witness. These battles can take place in various hazard-filled areas, such as a patio (complete with rampaging pigeon) and the beach (watch out for crabs and errant beach balls). 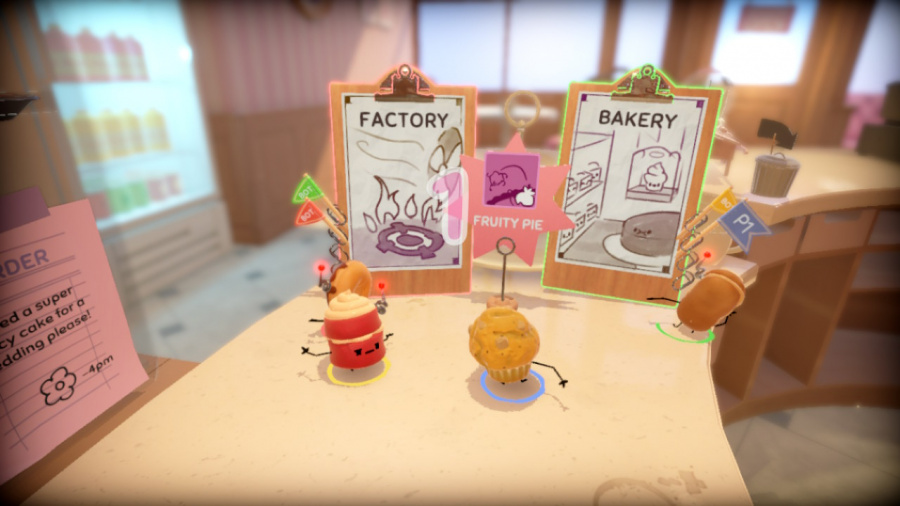 Alongside the six major games, there are a bunch of “snack time” mini-minigames, which deviate from the usual gameplay but are perfectly simple to understand and play. There’s one involving the toasting of marshmallows, where you must hold your marsh as close to the fire as you dare without burning it. There’s a game that sees you stacking an ice cream cone as high as possible, but the higher you pile the glacé, the harder it is to keep balanced. Best of all, there’s a game that sees you all running around on a giant cake avoiding knives and forks as they slam into the frame, gradually (and literally!) eating away at the very ground you need to stand on. The last treat standing is christened “Gateaux Royale”, which honestly is worth a 10 out of 10 by itself, but apparently, we need to use “meaningful criticism” instead. Tsk!

Winning rounds gains you chocolate coins, which you’ll then spend on toppings for your cake. However, even this is utterly fraught, with the toppings able to be snatched up by anyone with the cash to spare. Once bought, they’re gone, and if you need a certain type – multiple similar toppings grant a score bonus – there’s a fair bit of anarchy involved in making sure you nab the accoutrement you need before someone else does. Crucially, this also means that winning the main rounds isn’t the be-all and end-all; you can place first every time and still not hit the top spot if you don’t choose your decorations wisely. It’s an element that could frustrate some players with its quasi-randomness, but with Cake Bash, it’s best just to have fun and not worry too much about the winner. Much like Mario Party, things can go south for you in a hurry and the frustration that may bring to bear should be seen as a source of amusement, not resentment. 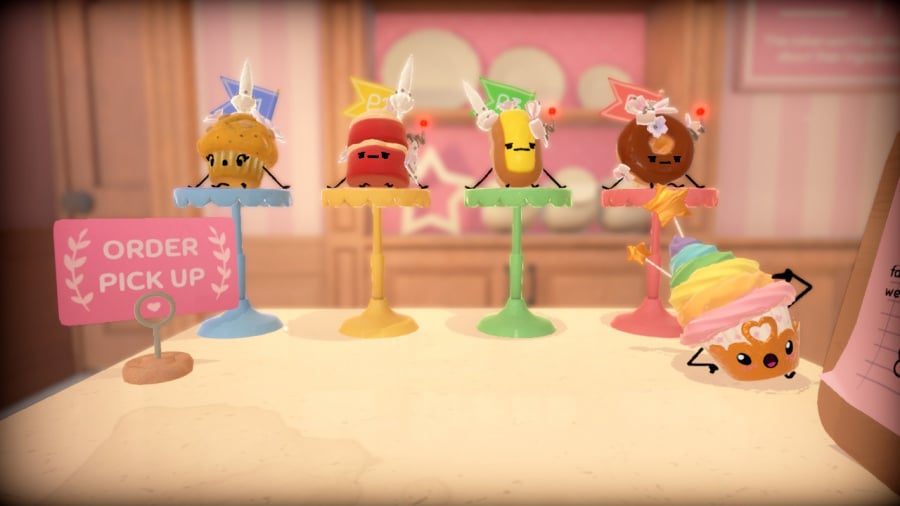 So, what is there to really criticise, here? It’s not very customisable, we suppose; it’s four rounds, three snacks, and that’s it. We’d appreciate a way to change this, though it’s not like it isn’t balanced and it certainly doesn’t take forever to run through a game. Still, it’s a little odd that it’s presented so straight-up, though you can jump into any game you’ve unlocked and play it immediately. You’re also able to unlock more cake “skins”, which sounds disgusting but lets your avatar hew ever closer to your calorific fantasies. As fun as it all is, though, there isn’t that much of it, and it’s not especially deep. But it’s not meant to be.

Visually, Cake Bash an extraordinary thing, with beautifully rendered graphics and great use of colour. It’s smooth, perfectly playable and the graphics are always very readable, even in handheld mode. Honestly, for what it is, it’s one of the best-looking games we’ve seen on Switch. Consistently attractive and full of personality – but never sacrificing playability – it’s just a joy to look at all the time. Even the interstitial screens and tutorials are gloriously rich with character. It’s matched with a frantic and somewhat Mario-esque soundtrack from dBXY.

A stand-out party game, Cake Bash deserves a place on your Switch menu. As with all games of its type, it benefits from having your friends alongside you, but online play with matchmaking (here called “matchbaking”) works well, and you can play with bots if you really feel like you need to. It’s only the eventual repetition that brings down Cake Bash, and that’s really in the pie of the beholder. Far more than a mere trifle, Cake Bash belongs in the upper crust. We suspect the publisher’s profit(erole) turnover to rake in the bread. Donut miss this one! (Reviewer is roughly bundled into an unmarked van and shot.) 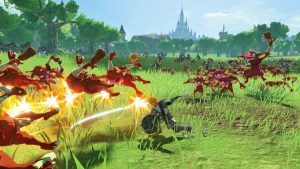