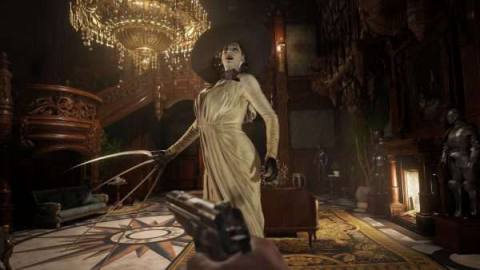 Resident Evil 8 is out soon and I can’t wait to see what secrets the final game is keeping hidden within its castle walls.

I’ve just watched just over one hour of Resident Evil Village (why isn’t it just called Resident Evil 8?) gameplay that was captured on PS5. I have a document open full of notes, half-written sentences saying things like “blood on wardrobe” and “why is everyone dying on me!?” Both potential names for some phoned-in horror novels, but I mention my notes mainly because I didn’t write down anything that jumps out as something I absolutely must write about. Immediately after taking my headphones off following the bloody conclusion to the presentation (a secret I’m not allowed to talk about! Oooh) I messaged Alex (another big Resi fan) and said: “It looks good, but fuck knows what there is to say about it.”

And it really does look very good. As a direct sequel to the superb Resident Evil 7 the game follows Ethan once again, this time in a snowy village beset by lycan (the posh word for werewolves) that’s overlooked by a massive castle. Ethan’s baby has been kidnaped by Chris Redfield, and now Ethan finds himself in Eastern Europe. That’s the setup. We all know about Lady D at this point, and you’ll either see her as an imposing villain or someone who you want to do things to you. You do you. The point being, I’m not sure I got a great deal of new thoughts out of this extended preview, other than making me hungrier to get my hands on the whole experience. I liked the look of it before, and now I still very much like the look of it.

We know a merchant is returning to the series, this time in the form of The Duke, a portly fellow who can be found in safe rooms to sell you supplies, crafting recipes, and upgrades, but also buy your found treasures for cash that you can then spend on more of the above. I’m not sure he’s got the meme-factor of Resi 4’s merchant, but I like him.

Puzzles will play a part in Resident Evil Village, as they always have in the franchise. Items found through completing puzzles often unlock doors, opening new areas to explore. What initially feels like a small village to wander around will open up to be something much larger as you progress, I expect much in the same way Resident Evil 7 went way beyond its initial setting.

If you’re more of a classic Resident Evil fan you might not be as thrilled about 8 as I am. This is definitely giving off strong Resi 7 (and 4, to a degree) vibes from what I’ve seen. Not only in the setup but also the way the combat appears – with the caveat that I’ve not actually played it. Ethan isn’t trained in combat like other Resi protagonists, so 7 feeling a little scrappier fit. Things seem similar here, but the lycan enemies seem to move a little awkwardly giving shootouts a clunky feel, especially in the scenes on rooftops. A minor point, perhaps, but it stood out amongst what was otherwise a glossy presentation.

Everyone has latched onto Lady D, the tall vampire lady, but Village does appear to have an impressive roster of characters we’re yet to see much of. How does this family of misfits relate to Mother Miranda and, importantly, are they a match for Resi 7’s Baker family? It’s too early to say definitively, but this lot, at least visually, really stand out. A lot of the hands-off demo consisted of story development, which is obviously lightyears ahead of the ham fans grew to expect from the original games. I’m keen to see what each of the villains has to offer and hopeful Lady D isn’t the only one that will leave an impression with her Mr. X-style hunting of Ethan.

Which neatly takes me to what I’m most excited about. I’ve only seen a tiny part of what Resident Evil Village will offer. Where will it go beyond this opening? What hold does cult leader Mother Miranda have on the villagers? What happened to Ethan’s baby that Chris Redfield kidnapped? Can you pet the werewolves?

It won’t be long until those questions are answered. Not only is there a demo that will give you a brief look at the game, but the full thing releases on May 7. The setting, characters, and story in Village so far have grabbed me more than the recent two remakes did, which I enjoyed but perhaps not as much as everyone else seemed to. I’ve always preferred the era that Resident Evil 4 ushered in, even liking 5, although to be clear I don’t abide 6.

Side note: I really hope that The Duke is Resident Evil 4’s merchant in a fat suit.

Resident Evil Village is just one of the big games due this year. Check out our comprehensive video game release dates page for info on every game due this year and beyond.

The post Resident Evil Village after an hour: I’ve not got much to say other than I really want to play the full game appeared first on VG247.