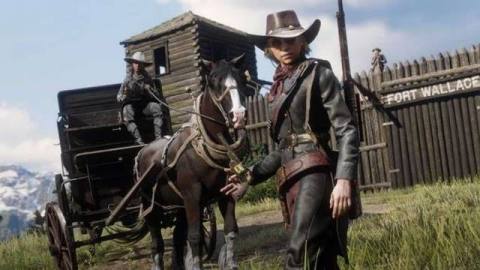 If you’ve ever eyed up Red Dead Redemption 2 but walked away on the basis that there’s just too much darned single-player game in there for your tastes, Rockstar has good news; it’s giving the game’s multiplayer component, Red Dead Online, a standalone release next Tuesday, 1st December, on PC, PlayStation, and Xbox.

Red Dead Online, you might recall, initially launched in beta form around a month after Red Dead Redemption 2’s October 2018 release, giving players the chance to root and toot against fellow humans across the single-player game’s expansive map. It didn’t have the smoothest of starts, admittedly, particularly as Rockstar struggled to remedy what many felt was an especially egregious griefing problem, but by the time it left beta the following May, there was a sense it was beginning to move in the right direction.

Since then, Rockstar has continued to update the multiplayer experience (if not always regularly and without incident, to the frustration of fans), adding new missions and features ranging from competitive fishing to class-like Roles, including the recent naturalist role. And now, as the second anniversary of its beta launch – and the imminent arrival of its Bounty Hunters expansion – approaches, Rockstar is giving Red Dead Online a new shot of life by severing its solo component and dramatically reducing its price.

As of next Tuesday, 1st December, Red Dead Online (which runs on PlayStation 5 and Xbox Series X/S via backward compatibility, in case you were wondering) will be available as a $19.99 USD standalone release via the PlayStation Store, Microsoft Store, Rockstar Games Launcher, Epic Games Store, and Steam. To sweeten the deal further, Rockstar is offering a 75% discount until 15th February next year, bringing the price down to $4.99.

Those of little hard drive space should note the multiplayer experience is not a small download, weighing in at 123GB – but players will be able to unlock the solo Red Dead Redemption 2: Story Mode for a currently unspecified additional cost.