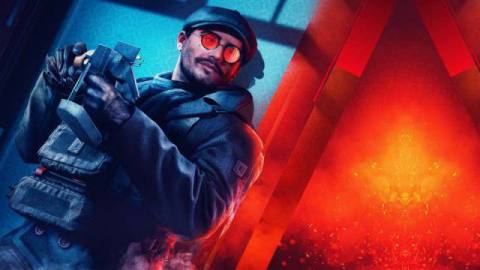 On March 16, Rainbow Six Siege gets a big update featuring a new character and much more with the Crimson Heist season. In the spirit of a giant new content update, Ubisoft has released a story trailer to kick things off before it actually launches. You can watch it right here!

Of note with the Crimson Heist content pack is a rework of the Border map, Newcomer playlist, a new weapon, and more. Of course, that wouldn’t be enough, there has to be a new Operator too right? It’s Flores. Flores is an offensive attack that comes with a bang-up kit that includes an explosive remote-controlled RCE-Ratero Charge. This hot new tech lets you blow up stuff safely at a distance, allowing you to bust holes in walls or taking out the opposing tech without putting yourself in harm’s way.

Numerous changes have occurred in the Border map in the name of quality-of-life improvements, including new walls, interiors, and exterior changes. Many other changes are coming in this patch as well, which you can read about here.

Rainbow Six Siege is well known as one of the most transformed turnarounds in the recent era of gaming. While Game Informer scored it a 7 out of 10 in its initial review, the game has utilized its framework to become a special tactical shooter experience today, in stark contrast to its launch. Watching a game-as-a-service entity come up from a rather mediocre beginning is impressive. You can check out some of our time with Crimson Heist right here.

“The multiplayer core at the heart of Rainbow Six Siege is a great foundation. But given its lack of infrastructure around the mode and severe lack of meaningful modes to buttress it, Siege feels slight when compared to its past entries and the other big-name first-person shooter franchises it competes against.” said Matt Bertz in Game Informer’s original review.  “The tactical demands Siege puts on players is unlike anything else on the console market today, and may prove enough for those seeking this flavor of first-person shooter. However, Siege doesn’t do enough to unite players who understand the importance of communication or provide variation in rest of the package.“

Have you played Rainbow Six Siege? Do you like it? Are you still playing and are you going to run Flores? Let us know in the comments!