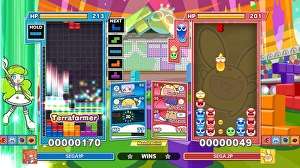 Puyo Puyo Tetris 2 arrived just in time to see out 2020 on consoles, but PC players sadly didn’t get an invite to that particular party. Thankfully, they won’t be left out too much longer, as Sega has finally announced a 23rd March release date for the puzzle adventure sequel on Steam.

As you might imagine, Puyo Puyo Tetris 2 is very much a continuation of the winning formula last seen in 2017’s Puyo Puyo Tetris, meaning plentiful block-dropping and blob-matching action spread across a variety of solo and multiplayer modes.

Adventure mode returns for more ridiculous story driven shenanigans, for instance, this time across multiple dimensions and with a new overworld map, and returning favourites such as Versus, Fusion, Swap, Party, and Big Bang are joined by the new RPG-inspired Skill Battle mode – featuring dynamic character-based skills and equippable item cards.