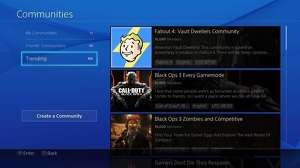 The PlayStation 4 communities feature shuts down in April, Sony has confirmed.

You will, however, be able to stay connected and use messaging features on your PS4 and the PlayStation App, Sony said in an update on PlayStation.com.

The communities feature, added to PS4 with the 3.00 update in September 2015, lets you create communities based around shared interests, such as games and genres. Communities include a message board with general discussion, screenshots shared by players, and the ability to join parties / games.