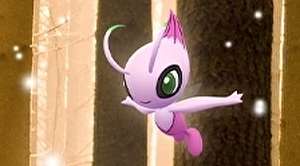 Pokémon Go has announced plans to give away an ultra-rare Shiny version of the already ultra-rare Mythical creature Celebi.

It’s an eye-catching giveaway, available for a limited time later this month to tie into the release of the upcoming Pokémon the Movie: Secrets of the Jungle, where Shiny Celebi appears.

Celebi was first introduced in 1999’s Pokémon Gold and Silver. In the 21 years since, there have only been two other opportunities to legitimately snag its pink-coloured Shiny version without cheating: a Japanese cinema ticket promotion earlier this year, and the laborious process of soft-resetting the Virtual Console version of Pokémon Crystal likely several thousand times.