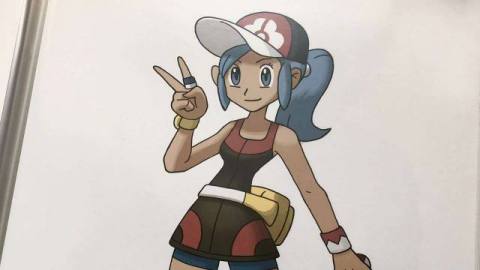 It’s not often that we get to see behind-the-scenes looks at original concepts or early designs, but Pokémon designer James Turner has given fans of the series a small treat on social media.

Turner, who recently served as art director on Pokémon Sword and Shield, has shared a couple of his designs from 2006 Wii title Pokémon Battle Revolution. The two characters made their way into a portfolio of his which he compiled a little later in 2009, as seen at the bottom of each page.

Doing a deep tidy and I found an ancient 2009 portfolio with the original designs I did for the Pokémon Battle Revolution characters…quite nostalgic. pic.twitter.com/3YRpuVdIuA— James Turner (@JamesTurner_42) November 11, 2020

It turns out that Turner was responsible for several fan-favourite designs from the game.

Yes! I enjoyed designing her. I just called her Ribbon…can’t remember what her real name ended up being 🤔— James Turner (@JamesTurner_42) November 11, 2020

Do you have fond memories of this game on Wii? Let us know in the usual place…