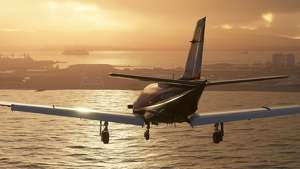 That big ol’ ‘simulator’ in Flight Simulator’s name certainly suggests a grasp for authenticity, but just how accurate is it really? That’s what one enterprising soul attempted to discover by playing the game while on a passenger plane, and piloting the exact same route they were travelling in real-life. Turns out it’s pretty damn accurate indeed.

The (admittedly wholly unscientific) experiment was conducted by Rami Ismail – formerly one half of celebrated indie studio Vlambeer – on a recent journey from Montreal, Canada, to Amsterdam, with Ismail documenting Flight Simulator’s progress versus the real thing over on Twitter as the journey continued.

Following a minor directional mishap on the runway during a drizzly evening takeoff, Ismail excitedly reported in to confirm that cloud entry had been mere seconds apart between the game and real-life once airborne, with a slighter window of difference, of approximately 30 seconds, when leaving the clouds.