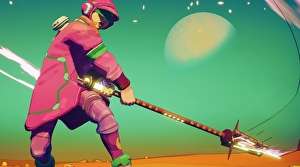 At first, you’re having a fine old time.

PixelJunk Raiders’ combat, if a touch inelegant, is enjoyable enough, your colourful planetary exploration accompanied by the silky strains of otherworldly synth soundscapes. Jewels shimmer in the distance – their ruby glow is hard to miss, particularly at night – and you already hope that the crumbling columns jutting up into the sky over there will have some tasty treasure secreted amongst ruins.

Plus, you’re a rescuer, and who doesn’t want to be the hero that swoops in and saves a doomed civilisation from certain death? As the saviour here to liberate the trapped Tantallians, you’re such a welcome sight to the poor hostages that they’ll delight in your arrival by joyously waving their arms in the air.