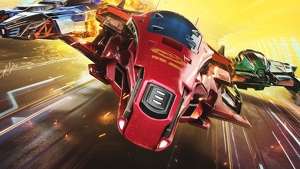 I was recently idly wondering whether we’d ever see another true WipEout again when I decided to download the Omega Collection via backwards compatibility on PlayStation 5. This loving compilation of Studio Liverpool’s last three entries in one of PlayStation’s most iconic series might be showing its age – you can trace the roots here back to the series’ PSP outings, and at times they certainly show – but that doesn’t stop it from being as sublime to play today as it’s ever been, especially in all the Omega Collection’s 4K/60fps glory. It’s pretty much as good as futuristic racers get.

Apologies for starting a review of one game while talking about another, but there’s no other way when it comes to Pacer really; this is a futuristic anti-grav racer that goes out of its way to evoke memories of WipEout. As it has every right to, seeing as some of the original team behind its development, back when it was still known as Formula Fusion before its 2019 rebranding, worked on WipEout 3. Pacer leans into the golden age of Sony’s series, recruiting The Designers Republic and Warp Records, two names as synonymous with the bleep scene of the 90s as WipEout itself.

So yes, Pacer feels familiar, which is no bad thing at all. You’re running ship to ship at speeds in excess of 1000kph, working up to the near-impossible-to-handle elite class from the starting ranks of the F3000 class. There’s a nice little nod there, if you’re of an age to feel a rush of nostalgia when listening to Autechre, to the F1 feeder class that used to pound the streets of Birmingham through the late 80s, and the SuperPrix circuit feels like it’d slot nicely into Pacer somewhere. This is a scuzzier, downbeat view of the future, more in keeping with the likes of WipEout 2048 than the more pristine earlier entries.