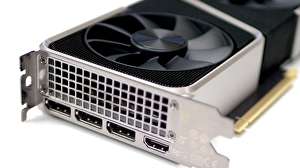 The rumours were true: the GeForce RTX 3060 Ti is a real graphics card, and we’ve been testing it for the past week. Nvidia promises RTX 2080 Super level performance in a smaller, cheaper and more efficient Ampere design, and – spoiler alert – that’s exactly what our testing shows they’ve delivered.

For £370 in the UK, $400 in the US and around €399 in Europe, the 3060 Ti isn’t quite in mainstream territory, but it’s significantly faster than the RTX 2060 Super it replaces at the same price-point and AMD’s competitive Big Navi architecture has yet to debut at anything below the $580/£530 price point of the RX 6800. If the Green Team is able to actually produce these cards in volume – and sell them to actual customers rather than bot farms – they could be onto a winner.

In terms of the specs and underlying architecture, the RTX 3060 Ti uses the same GA104 GPU as the RTX 3070, but with fewer CUDA cores – 4864 versus 5888. The card also operates at slightly slower clock speeds (1665MHz boost versus 1725MHz) to fit into a 20W lower TDP (200W vs 220W). The memory subsystems are unchanged however, with both cards sporting the same 8GB GDDR6 operating at 448GB/s. It’s good to see 8GB of VRAM becoming the new standard, with all next-gen cards from both teams providing at least that much thus far.