Nuts, a game all about keeping your eyes on squirrels as they get up to no good, finally has a release date on PC and Switch.

The game is set to launch on Apple Arcade first on January 22 before landing on PC and Switch on February 4.

“Gear up your caravan, boot up your GPS, spread out your map and head for the depths of Melmoth Forest,” reads a blurb for the game over on the Nuts site. “As a rookie field researcher, you’ll place cameras during the day, and watch the footage at night, tracking the movements of a scurry of squirrels.

“Where do they hide their nuts? What puzzling routes do they take? And why do they behave so strangely?” We’d be lying if we said this wasn’t one of the best concepts we’ve seen for a game for a very long time.

Additionally, the art style and audio are noteworthy, too – adhering to schemes this bold is an impressive choice, and the results certainly are striking, too.

The game will be published by Noodlecake and has been developed by the “tight-knit indie team” of Joon Van Hove, Pol Clarissou, Almut “Muuutsch” Schwacke, Charlene Putney, and Torfi Ásgeirsson who have worked on the game from offices in Canada, Iceland, Denmark, and Germany. 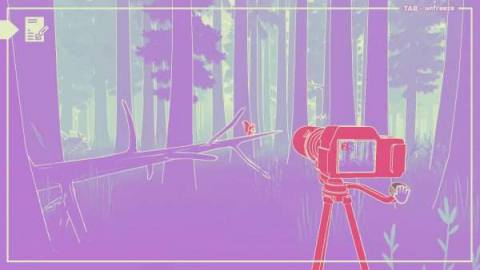 Ahead of its launch, the game has attracted its fair share of attention: it topped the Audio Design category for IndieCade in 2020, it was a finalist at Amaze Berlin 2020, and made selections at Day of the Devs 2019 and the EGX Leftfield Collection in 2019, too.

The post Nuts, the adventure game about squirrel surveillance, comes to Switch and PC in February appeared first on VG247.