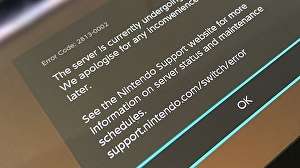 The trial version of Capcom’s upcoming beastie basher was released at midnight last night, following a Nintendo Direct full of juicy new details about the game.

Switch owners reported struggles trying to download the demo overnight, and this morning the Switch eShop is currently unreachable in the UK. At the time of writing, attempting to connect to the eShop brings up the following message: