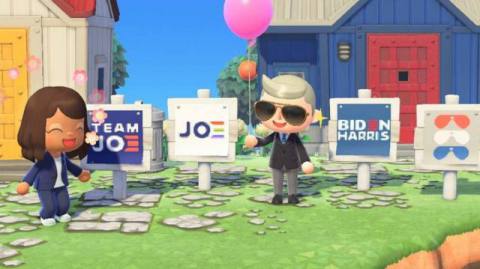 But, after seeing the game used so prominently, Nintendo has now issued a formal set of guidelines for businesses and organisations, which notably includes the line: “Please also refrain from bringing politics into the game.”

The announcement of these guidelines – and that political line in particular – comes just weeks after the US election, in which the Biden campaign used Animal Crossing to release virtual yard signs and host an island with information on his campaign and details on how to vote.

“We deeply appreciate that so many people around the world are having fun with Animal Crossing: New Horizons (the Game) for Nintendo Switch. Thank you for your support and for helping us build such a wonderful community,” Nintendo’s guidelines begin.

“While our services and products are generally for personal use only, we understand there may be situations in which businesses and organisations would like to use or reference the Game in relation to their business. As such, we would like to share a few guidelines with those businesses, organisations, and anyone representing them, to preserve the experience for the millions of people enjoying the Game recreationally.

“If we see your activity is not following these guidelines or is damaging or having bad influence on the community, we may ask you to stop such activity or usage of our contents, and take appropriate actions, including prohibiting your future business usage of the Game.”

The guidelines give the green light to providing custom designs and island Dream Addresses, inviting other players, plus uploading pictures and videos to “family-friendly websites and social networks”.

But the guidelines also say businesses and organisations should stick to content and activities that align with the game’s family-friendly age-rating, avoid anything discriminatory or offensive, and not use it to make money.

And then there’s also the line about politics. What will Nintendo deem to be political? Do social causes also qualify? And can this ever really be enforced – are these guidelines simply a tool to remove problem cases which are clearly offensive?

It’s also worth remembering these guidelines relate only to businesses and organisations, rather than personal use. Earlier this year, New Horizons was banned in China after it became a haven for Hong Kong protesters. Players used it to host pro-Hong Kong signs and share designs for anti-Chinese protest clothing. You’d think Nintendo’s guidelines wouldn’t cover these players acting individually – but we’ll have to see if and when Nintendo enforces its rules in the future.