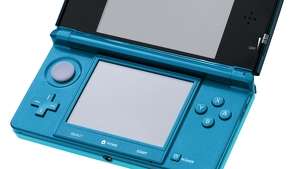 10 years ago today, Nintendo 3DS launched in Europe. It had been a month since the handheld arrived in Japan, and North America was soon to follow.

The initial 3DS model now looks angular and small compared to some of its many later, larger redesigns. Back in 2011, the dinky portable was available in just Aqua Blue and Cosmos Black colours, and launched without a major Nintendo franchise as a system seller.

Sure, it had Nintendogs + Cats, as well as Pilotwings Resort. And from third parties such as Ubisoft and Sega it had Rayman 3D, Super Monkey Ball 3D and two Tom Clancy games. But there was no Mario, no Zelda – at least not yet.