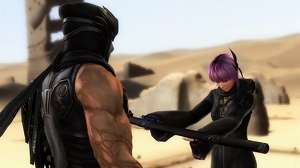 Ninja Gaiden: Master Collection runs at a 4K resolution and 60fps+, according to the Microsoft Store.

The trailer is below: