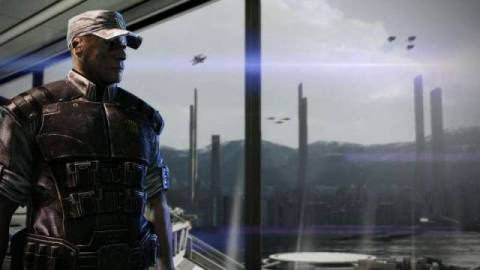 A new Mass Effect Legendary Edition video shows off exactly why Captain Anderson is the best Space Dad. The latest snippet shows off the various improvements made to the third game in particular, which is evident with the details added on the broken glass and the light interaction with the roaring fire.

In the beginning of Mass Effect 3, things go downhill in a hurry when the Reapers arrive. What was supposed to be a meeting of the military minds ends up becoming a fight for survival as Anderson and Commander Shepard battle their way across Earth to get to the Normandy to rally the troops. Mass Effect 3 has always been the “prettiest” of the three games, for obvious reasons, but the tiny details changed make the world of a difference. The paneling detail is far more intricate than the original, and the glass realism is much more prevalent. While this attention to detail doesn’t make or break the game, it does show off how the smallest of alterations can sometimes make the biggest difference.

BioWare also shared the same clip on Twitter, which is where I first spotted it, but that social media platform absolutely destroys video quality, so the Instagram post is a better representation of the visual changes.

For those newcomers to the world of Mass Effect, welcome! For a little backstory, Captain Anderson is a human war hero and the original captain of the SSV Normandy, a ship that later becomes an iconic staple in the series. He is like a father figure to Shepard and is one of the best characters in the entire trilogy despite not being a playable character or a fixed staple aboard the ship.

His backstory is also incredibly interesting, especially regarding his history with Khalee Sanders and Saren, the latter being the enemy in the first game. You can learn more about him and the rest of the expanded Mass Effect lore with our deep dive here.

Want more Mass Effect Legendary Edition goodness? We have tons of exclusive coverage here at Game Informer as part of our previous cover story. Check out everything from what’s different to “why now?” with our game hub.