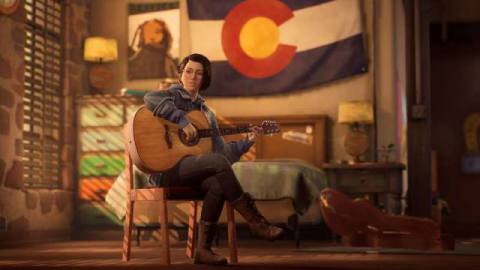 Life is Strange: True Colors is the latest Life is Strange game in the franchise and Deck Nine showed off the reveal trailer during today’s Square Enix Presents showcase. The latest story is an all-new tale starring a brand new protagonist and a new power. For those that were fans of the original duo with Max and Chloe, it looks like this new narrative will feel similar to that.

Players will take on the role of Alex Chen, a Haven Springs native that had to suppress her “curse.” Her psychic powers are different than what we’ve seen with Max; instead, Alex has the power of empathy. While some may laugh, the powers in action are intense, allowing her to experience, absorb, and even manipulate powerful emotions in those around her. She can see auras and following the “accident” that resulted in her brother’s death, her power comes roaring to the surface in an effort to find the truth behind her brother’s death and a dark secret that lurks beneath the town’s surface.

Also confirmed was the tidbit that unlike previous games in Life is Strange, True Colors will not be episodic. Instead, players can unravel the mystery that is True Colors in one go.

“It has been such an honor to return to the vibrant, emotive, and impactful world of Life is Strange,” says Deck Nine vice president, Jeff Litchford. “We are delighted to share this new story with you: a story of empathy, human connection, and the struggle to find a place to call home. All of the advancements of storytelling, development technology, and premium voice acting that we have made since Life is Strange: Before the storm will allow players to be more immersed in the compelling world of Life is Strange: True Colors than ever before.”

Deck Nine helmed the previous entry starring the original characters of Life is Strange with Before the Storm, now the studio is back with a fresh adventure. In a special collaboration with musical start Mxmtoon, True Colors stole the spotlight with a close look at the new faces we’ll meet and the stellar music that the soundtrack will have.

Life is Strange: True Colors will be available in three editions: the Standard, the Deluxe, and the Ultimate. You can learn more about the different versions right here through the game’s official website. As for the game itself, True Colors arrives on September 10, 2021 on PlayStation 5, Xbox Series X, PlayStation 4, Xbox One, PC, and Google Stadia.

Thoughts on the next step for the Life is Strange franchise with True Colors? Weigh in with those first impressions in the comment section below!