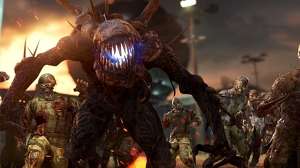 Treyarch has announced the new map for Call of Duty: Black Ops Cold War’s Zombies mode after teasing it earlier this week.

Firebase Z is due out on 4th February as part of Season One of the shooter, and is free for all players. Here’s the official blurb:

“With the destruction of the WW2-era Projekt Endstation site after investigating the otherworldly Dark Aether anomaly in Poland, Requiem now sets its focus on the latest Dark Aether outbreak site: Outpost 25, known by the code name Firebase Z.”