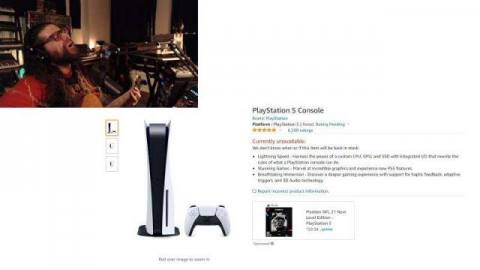 The PlayStation 5 has been nigh impossible to come by, and it’s left many gamers in an emotional state. Each announcement of a new restock fills us with hope only to have that light extinguished in a matter of minutes or even seconds thanks to how quickly the systems get snatched up (thanks in no small part to scalper bots). One Twitch streamer expresses that heartache in perhaps the purest form possible: through the power of song.

According to Kotaku, that streamer is one Claudio Sanchez, a musician and frontman of progressive rock band Coheed and Cambria. Prior to his Twitch stream, Sanchez, who does own a PS5, performed a quick, impromptu song about PS5 shortages using the console’s menu music as the backup melody. The result is a mournful ditty that is both lovely and hilarious, and perfectly captures the frustration all of us have experienced trying to procure the elusive console. If I were an online storefront, I’d license the song and have it automatically play the moment stock sells out again. But that’s just me.

Sanchez tells Kotaku that this song is the latest of small performances based on the games (or in this case, hardware) he’s playing at the time. If you want to support more of Sanchez’s work or just watch him play games, take a look at his Twitch channel.

PlayStation 5 heartbreak comes in many forms, whether that be the abrupt cancellation of those cool custom black versions or the always crappy  “I got a cinder block instead of a console” trick. For better or worse, now we have Claudio’s haunting melody to accompany our disappointment whenever a online cart fails to check out in time. Feel free to talk, or sing, about your failed attempts to land a PS5 in the comments below.