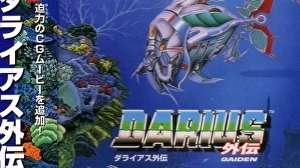 Music can make a game, but sometimes it is the game. OutRun without Hiroshi Kawaguchi’s selection of iconic tracks is like a country drive without any tunes on the stereo; it’s a journey robbed of its heart and soul. Few other game series feel as dependent on their score as Darius, but rather than the sun-kissed, summer breeze of OutRun the mood summoned by Taito’s in-house band Zuntata here is… Well, it’s something else entirely.

I used to have it down as otherworldly, which is perhaps an overly literal reading of all that dissonance you’ll find during Darius’ late 90s pomp – listening to the soundtracks for Darius Gaiden or G-Darius, where the strangeness is maxed-out, it feels like you’ve chanced upon some transmission from a distant star. Earlier entries chimed with alien melodies, sampled voices that sound like they’re reaching out to you from another dimension while beats skitter in and out of time – a realisation of composer Hisayoshi Ogura’s desire to break free from soundtrack convention.

“At the time, it was pretty adventurous to use avant-garde rhythms and irregular meter in game music,” Ogura said in a remarkable interview a few years back. “I remember telling one of my juniors at the company that a few years from now, this kind of thing will be everywhere, so… I mean, I think I just wanted to destroy something, and saw Darius as an opportunity to wipe out what was considered common sense in game music at the time and recreate things from the ground up.”