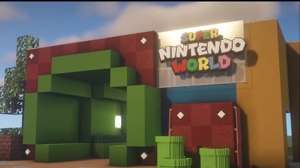 Super Nintendo World – the new theme park about to open at Universal Studios Japan – is being recreated in Minecraft.

Super Nintendo World at Universal Studios Japan is still scheduled to open on 4th February, but visitor numbers will, naturally, be limited upon opening to avoid crowds and advance registration is mandatory.

Thanks to Dippy22, however, Nintendo fans who also happen to be Minecraft players can live vicariously through their painstakingly recreation based on plans and photos of the new theme park. The 1:1 remake is apparently 45 per cent complete and the screenshots show off an incredibly faithful homage which hopes to have “3D models of every unique design this land has to offer” (thanks, PCGN).