There can be only one.

Remember the Mortal Kombat movie? The original one, from 1995? It’s a guilty pleasure of mine. I loved the silly fights and silly dialogue and ropey sets, and I loved Christopher Lambert’s silly performance as Raiden, the famous Thunder God.

Now, 25 years later, Lambert has reprised his role as Raiden for a Klassic MK Movie Skin pack for Mortal Kombat 11 – and it’s fantastic.

Here we have Lambert’s likeness as well as his voice, delivering new dialogue just for the game. His character model looks great, and developer NetherRealm has even added different colour lightning depending on which version of Raiden you’re using (Dark Raiden included!).

There are loads of new lines of dialogue in this £4.99 pack. The video below, from YouTuber MKIceAndFire, rounds up the pre-game chat:

Of course, with the addition of Lambert’s Raiden, we can set up a fight between the movie Raiden and the movie Shang Tsung. The evil sorcerer has a wonderful design that incorporates the likeness and voice of Cary-Hiroyuki Tagawa, who played Shang Tsung in the movie. 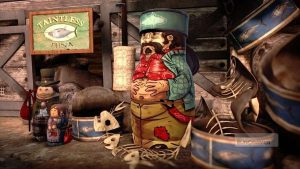