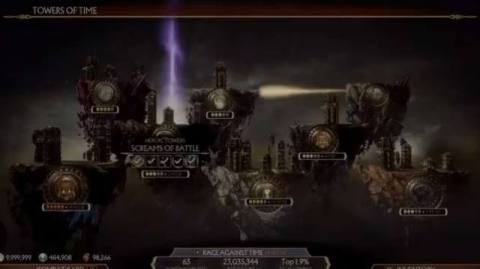 A long-running secret within Mortal Kombat 11 has finally been solved.

A year ago, Mortal Kombat 11 players noticed a mysterious meteor coursing across the sky within the Towers of Time mode. Players realised it turned up at 10 minutes past the hour, and suspected some sort of input was required to trigger a reward. But nobody knew the combination – until this week.

Mortal Kombat modder TheThiny then discovered the inputs required during the meteor’s appearance by creating a mod that always spawns the meteor, thus allowing all possible combinations to be tried.

Here’s the correct combination: left, up, left, right, left, up, up.

Correctly input the combination during the meteor’s appearance (you have to be quick!), and you unlock a random tower with a random Kombat League character skin as a reward.

The meteor turns up at 10 minutes past the hour, every two hours (this appears to be a timing change from when the meteor first appeared a year ago), starting from 10 minutes past midnight in the UK. Here’s TheThiny’s video on the solution:

You need a lot of resources to actually play this Tower, too:

And the tower itself is pretty hard! It’s set at the maximum difficulty, so you’ll need some consumables to complete it. You’ve got an hour to play the tower, but if you leave the Towers of Time mode and then return, the tower will disappear. So if you intend to play it, you have to jump straight in.

That’s it! It’s a nice little secret in a game known for its Easter eggs and secrets. I suspect there are plenty more still unsolved.