The Smithy in Monster Hunter Rise is central to your life in Kamura Village. Not only is it where all of your equipment is made, but it’s also where it’s upgraded as well.

To clear some of the smoke surrounding the processes of the Smithy, we’ll break down a few of its major functions in more detail.

Here’s how to upgrade, Ramp-Up, and Rollback your equipment at the Smithy in Monster Hunter Rise.

How does the Smithy work in Monster Hunter Rise?

There are a lot of question marks throughout the menus in the Smithy, and that can be very confusing when there’s not much explanation of what the missing items are and how you get them.

This is because you can’t see many of the forgeable weapons or armor until you possess at least one of its constituent parts. 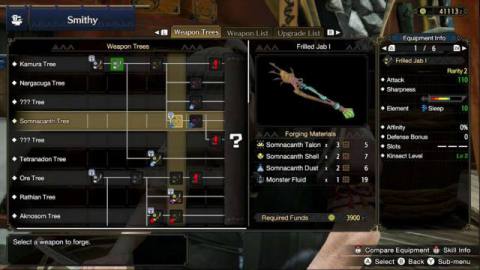 So, for example, you can’t see many of the weapon trees in the Smithy during the early game because you haven’t fought the wyvern that tree belongs to yet. The Anjanath tree won’t appear until you’ve fought one and got some of its items, and so on.

As you defeat more enemies and gather materials from them, more icons will become available and more of the screen will open up.

It’s not just monsters you can get Smithy items from though.

Buddies you send on Trade Requests from The Argosy can bring back things you can use at the forge, while you can also get special tickets from Rampage mode and by completing side quests in Kamura Village. 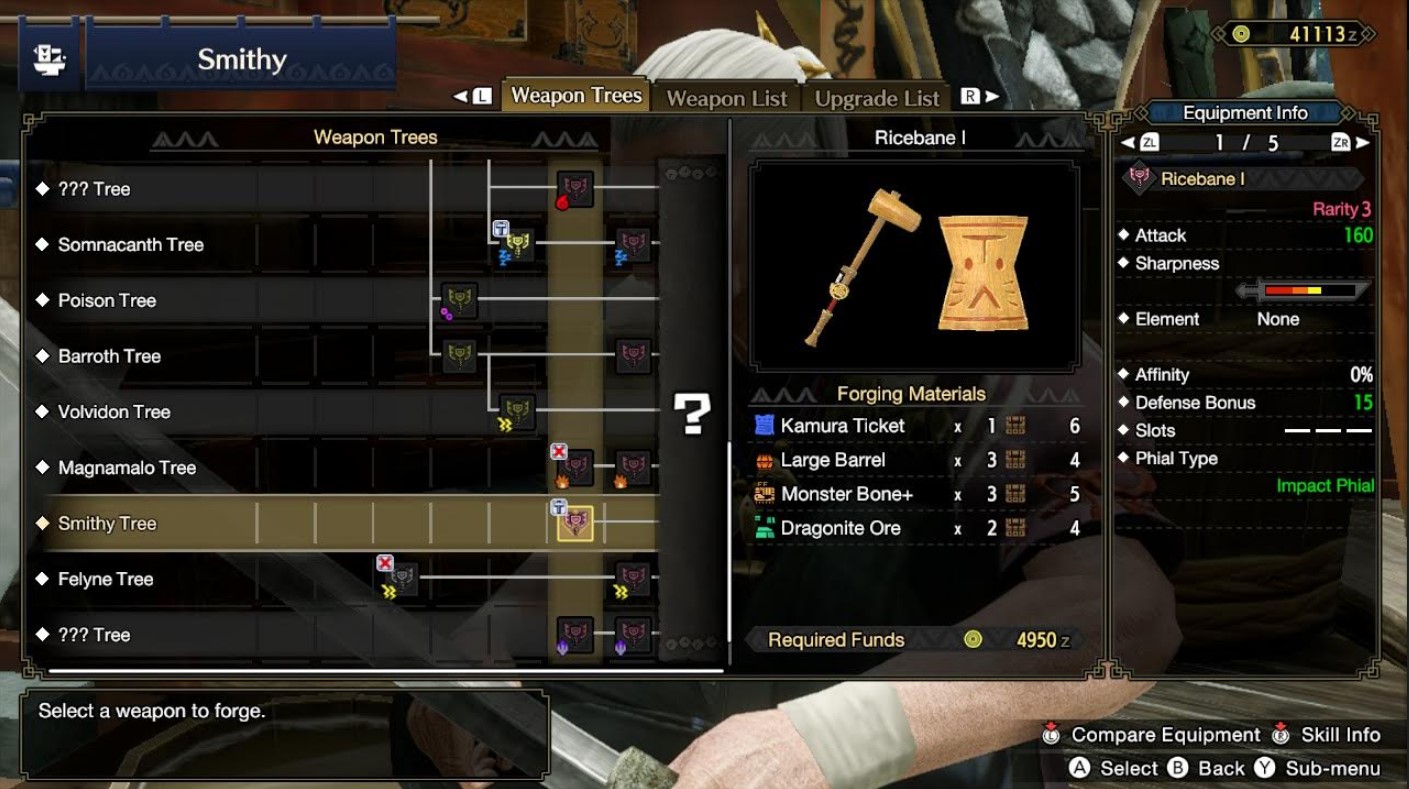 Check back in at the Smithy regularly to see what trees have opened up for you since your last visit.

On top of all of this, when you make things for your hunter the offcuts will be returned to you as scraps.

You can get lots of different kinds of scraps, from general-purpose ‘humble scraps’ to scraps for each large wyvern. 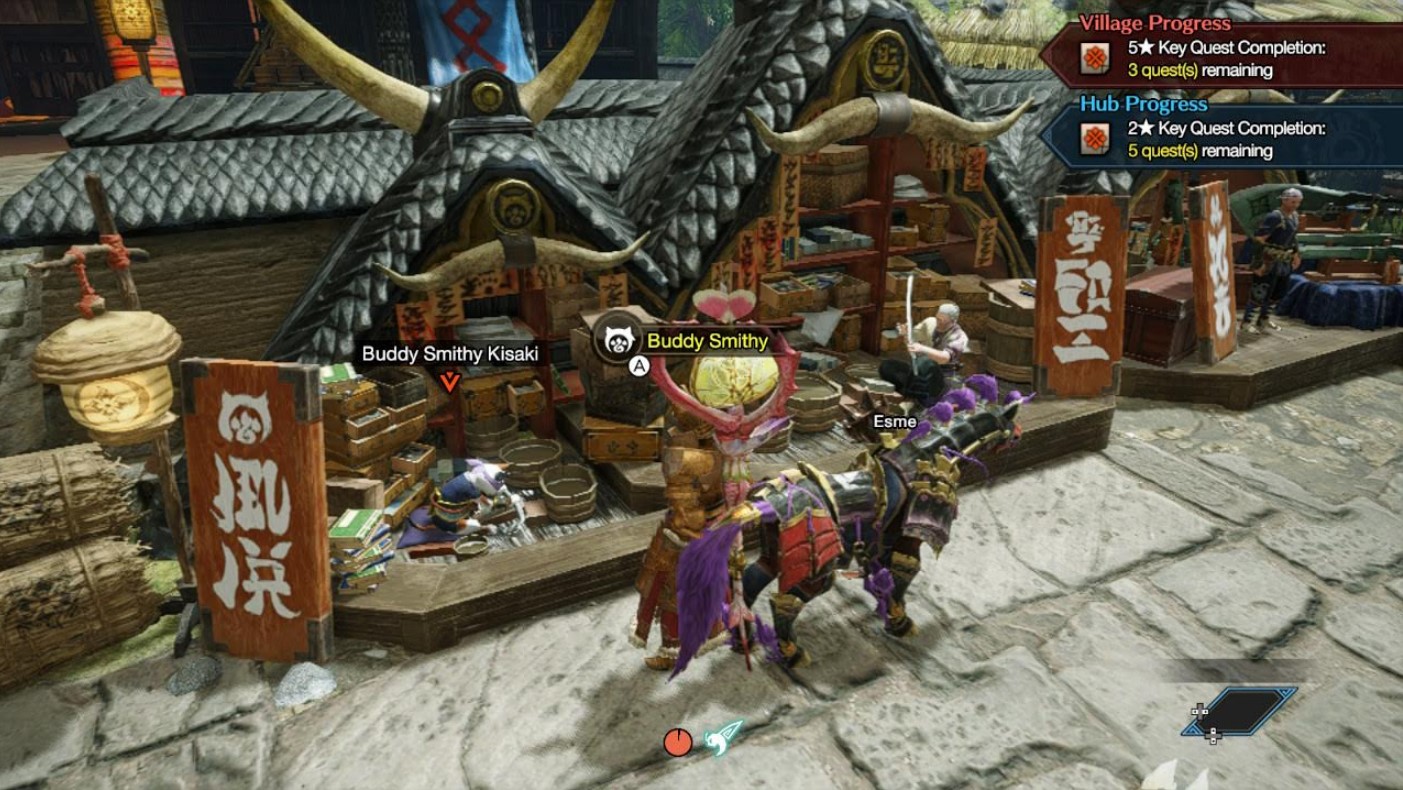 These scraps can be spent at the Buddy Smith to make the corresponding item for either your Palico or Palamute.

The Buddy Smith is just to the left of the regular Smithy.

How to upgrade at the Smithy in Monster Hunter Rise

For Armor, upgrading is very simple. You spend Armor Spheres, which are collected from optional subquests mainly, to bolster the stats of your gear.

If you find a set of gear you like, don’t hesitate to spend your spheres.

You can get away with wearing just about anything until you roll the credits the first time in Monster Hunter Rise, then when you reach High-Rank hunts, you’ll start getting new materials which makes your Low-Rank gear obsolete.

If you find something you like, upgrade it – it’s as simple as that. When you reach High-Rank is the time to start worrying about builds. 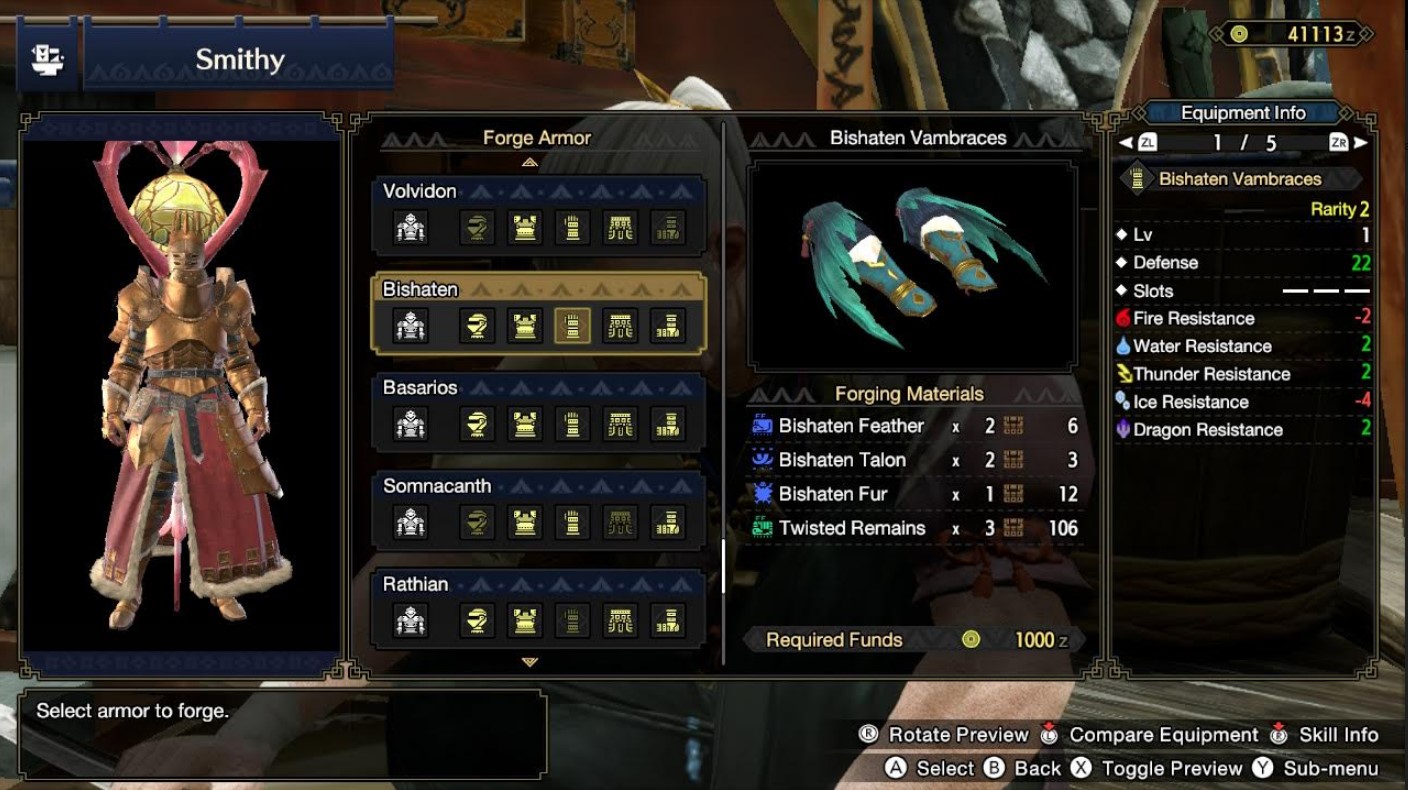 When you’re making a weapon, you have two options: Forge, or Upgrade.

If you’re making the first incarnation of a weapon, you will always have to pay the forge cost of materials and money to create something.

However, if you’re making something further to the right of the Smithy menu, you can either forge it outright, or create the preceding versions of the weapon and upgrade them – eventually paying a (usually smaller) upgrade cost instead of a forging one.

You can see which items are connected by the grey lines drawn between them.

How to Rollback at the Smithy in Monster Hunter Rise

When you’re not sure if you’ll like something you’re making, upgrading your way up to that item is usually a good idea.

This is because when you’ve progressed through the different stages of a tree, you can Rollback a piece of equipment to a previous state if you don’t like it – reclaiming all of your materials for use elsewhere. 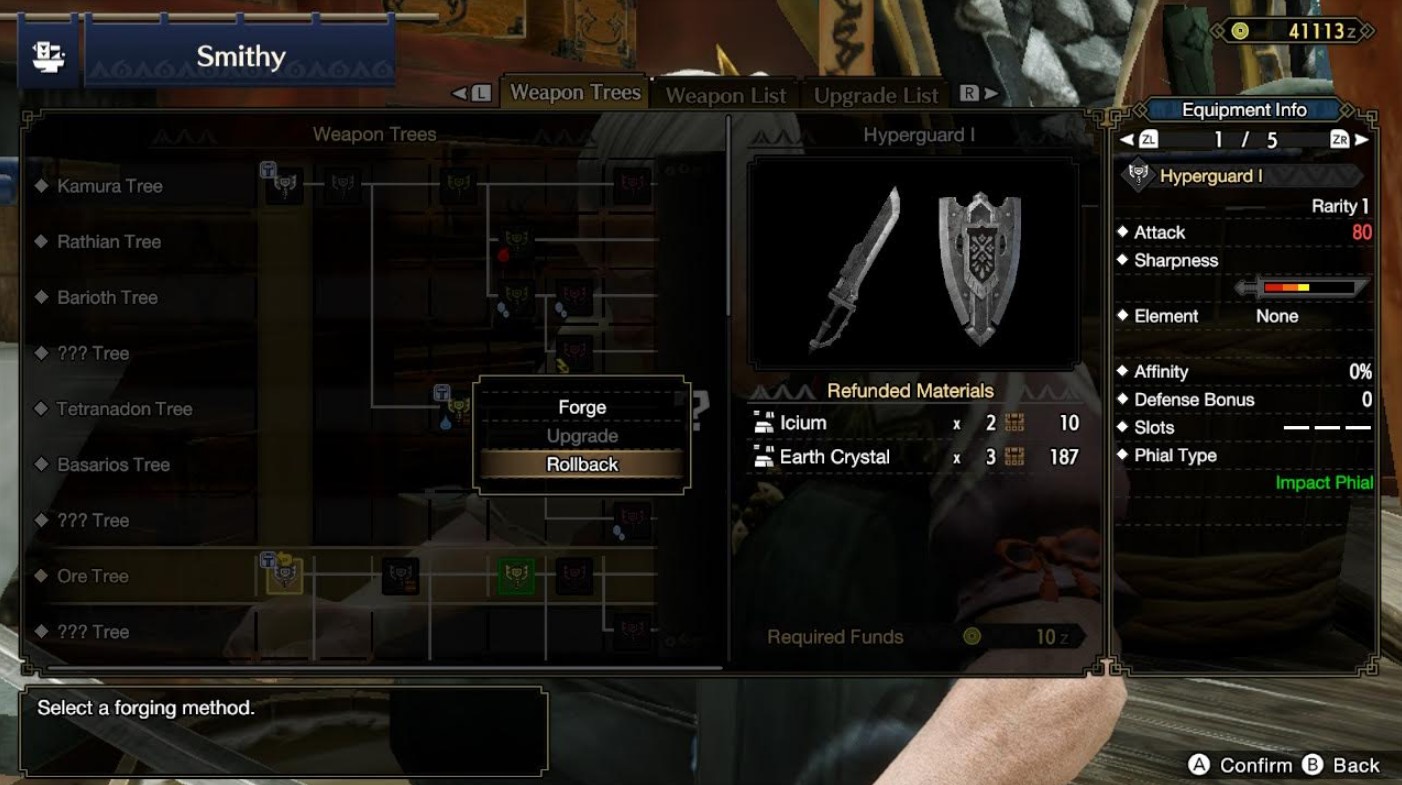 Doing this allows you to experiment more freely, without having to grind out tons of different materials.

Only upgraded items can be rolled-back however, not ones that have been freshly forged.

How to Ramp-Up at the Smithy in Monster Hunter Rise

Another way that you can increase the capabilities of your equipment is by using Ramp-up.

When you play Rampage missions, you’re rewarded with Defender Tickets. These can then be spent increasing the stats of your items at the Smithy. 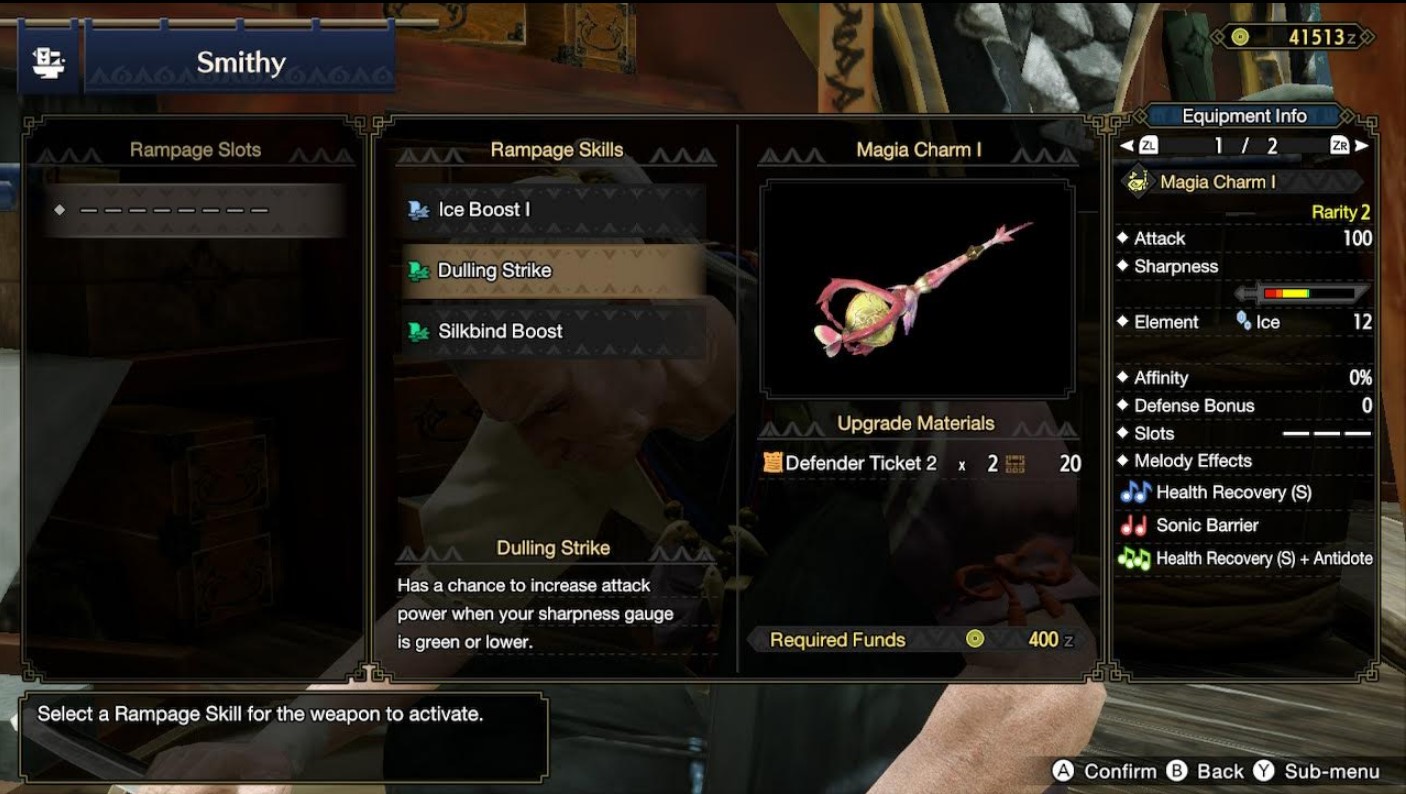 All you need to do is head into the menu and select the stat you’d like to buff from the options.

You can only slot one buff at a time, but the Defender Tickets you collect are very plentiful, so it’s not a disaster to have to replace them.

The post Monster Hunter Rise Smithy | How to upgrade, Ramp-Up, and Rollback appeared first on VG247.