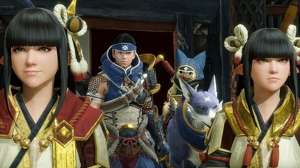 I’ve just drifted my dog into battle, his hindlegs tilting out in a glorious arc at the press of a button for that precious extra boost of speed, before dismounting with the flick of a wirebug that sends a silken line up into the sky, allowing me to grapple onto it and swing towards my prey. In mid-air I pull out a sword fashioned from the remains of a bony Besarios and drive it straight down into the skull of another. Bring this big bastard down and I can fashion a hat out of his hide to complete my Besarios outfit and grant myself an attack boost, so that I might be able to go out and do it again only with more flair, and more efficiency.

The core loop remains unchanged but Capcom’s series has evolved an awful lot since its inception way back in 2004, and after a long run on Nintendo’s console that peaked with the exceptional Monster Hunter 4 Ultimate it was only after 2018’s multi-platform Monster Hunter World that the series found a proper foothold in the west. Here was Monster Hunter at its most accessible – and, with expansion Iceborne, at its most brutal – and for the first time it no longer felt like a niche pursuit. Monster Hunter had finally gone mainstream.