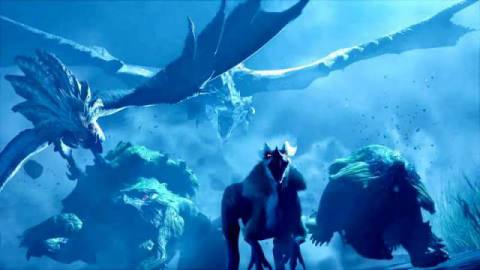 Monster Hunter: World was an important paradigm shift for Capcom’s beloved franchise. The well-paced difficulty ramp made progression enjoyable for newcomers, while countless endgame challenges kept expert hunters coming back for more. Monster Hunter Rise’s gameplay often attempts to copy World’s success, which isn’t always a bad thing. Battles continue to be an exhilarating dance with death, gear customization is satisfying, and coordinating hunts with friends makes for awesome fun and unexpected outcomes. Even with the introduction of new mechanics that help amplify these features, Monster Hunter Rise struggles to establish a creative identity of its own.

Encounters with huge and impressive beasts is the centerpiece of the experience, putting your skills with the myriad weapon types to the test. Once victorious, you spend your downtime sprinting around the main hub, upgrading or forging better equipment, nabbing a bunch of pending quests from NPCs, and meticulously preparing for the next hunt. This captures the fundamentals of the fantasy-action series, but Monster Hunter Rise doesn’t venture far beyond that comfort zone.

During the opening hours, the people of Kamura Village are busy preparing for the “calamity,” an army of wild monsters hell-bent on laying waste to everything in their path. As the village’s newly registered hunter, you must slay or capture numerous creatures in the biomes beyond your hometown’s steel gates. As soon as you’re done marveling at the blooming cherry blossom trees and humming along to the gorgeous score, be sure to grab key consumables from your ever-expanding item box, eat a delicious meal at the local eatery for exclusive bonuses, and venture forth into the unknown. This routine has a comfortable monotony that Monster Hunter fans will likely appreciate, but the addition of the “Buddy Plaza” adds a new feature to your return trips.

The Buddy Plaza is a base of operations for your palicoes and palamutes (cat and dog warriors, respectively). You can send your trusty pets on missions of their own to procure miscellaneous crafting materials, spend currency to train them so that they’ll be more effective in future engagements, swap out their equipment, or hire even more of them by talking to the handler. Buddies are extremely versatile, and Monster Hunter: Rise constantly rewards you for using the plaza’s various facilities. Still grinding for that rare beak or tail? Your palico “meowcenaries” might surprise you with one from a recent expedition. This kind of positive feedback gives the lulls between combat/exploration some much-needed flavor.

The environments are visually arresting, and house entire ecosystems filled to the brim with endemic life as well as hard-to-find secrets. My two favorite locales – Shrine Ruins and Flooded Forest – are littered with the remnants of ancient civilizations; they have huts wrapped in thick vines and sky-piercing pyramids that loom in the distance. While roaming, I often thought about the histories of these forsaken settlements and the people that once called them home. However, my imagination was often all I had to go on, since the lack of meaningful story beats makes the plot fall flat.

A generic tower defense mode serves a lackluster reminder of the larger narrative; these jarring “rampage quests” involve constructing an array of automated turrets and mountable ballistae around the village’s gates. Waves of monsters clutter the screen and work together to pummel you while also breaking through your defenses. All the enemies are damage sponges, and clearing the arena hardly requires much thought; I often just held the fire button until I was the last one standing. Thankfully, you aren’t required to complete a ton of rampage quests to gain access to Monster Hunter Rise’s main missions.

You spend most of your playthrough experiencing the classic loop: Battle gigantic adversaries like the feral Arzuros and Lagombi, collect mundane items, and deliver heavy objects to camp. Be sure to explore the nooks and crannies of every map as floating, colorful birds called “Spiribirds” can be absorbed to increase your health, stamina, attack, or defense. These buffs make completing the above-mentioned missions much easier. Don’t want to do all of that on foot? Ride your palamute to expedite navigation or whip out your wirebug to scale cliffsides and mountain ranges in seconds.

Wirebug attacks, called Silkbinds, add a new layer of intensity to the action. When used repeatedly, Silkbinds force monsters into a mountable state. These short combat sequences are all about using a monster’s power against them by ramming into nearby structures for stagger damage or sprinting towards other unsuspecting adversaries to dish out the pain. Wyvern-riding is my favorite mechanic because it adds an exciting burst of strategy to the franchise’s age-old combat system.

Beyond mounting monsters and using the wirebug to wall-run in spectacular fashion, not much else distinguishes Monster Hunter Rise from the installments that came before. It has enough endgame content to keep you occupied long after the credits roll (if you don’t mind copious amounts of grinding) and multiplayer is still the optimal way to play, but the excitement of my early hunts waned before long. Monster Hunter Rise is far from being the next definitive chapter in the series. Nevertheless, if you’re looking for a polished-but-conventional adventure with a few small-scale nuances, then you’ll be right at home in Kamura Village. 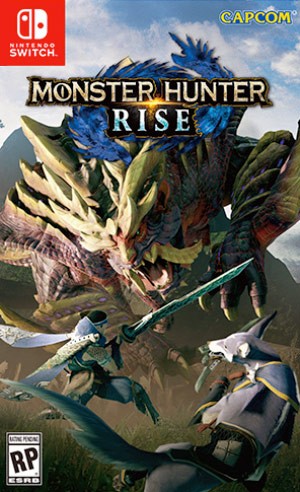 Summary: Monster Hunter Rise showcases its commitment to engaging combat with interesting new mechanics, but these changes aren’t enough to differentiate it from previous titles.

Concept: Defend your village from angry monster hordes while spending quality time with your growing roster of lovable palicoes and palamutes

Graphics: Character textures don’t always look great, but the world itself is vivid

Playability: Zipping through each backdrop with the wirebug makes you feel like a nimble acrobat, and controlling mounted monsters feels satisfying

Entertainment: Fighting different beasts is always a blast. However, the time you spend outside of combat pales in comparison to your epic encounters