In Monster Hunter Rise, you’ll first encounter the Rakna-Kadaki quite late in the game, in the seven star hub quest named “Can’t Kill It with Fire”.

The Temnoceran monster is able to weave you up in deadly webs and spit out fire towards you. Did we mention that it’s a massive spider that fire just does not work against?

This fight is tough, and as a high-rank hunter, you’re going to want all the help you can get. Here, we’ve figured out the best way to beat Rakna-Kadaki.

How to Beat Rakna-Kadaki in Monster Hunter Rise 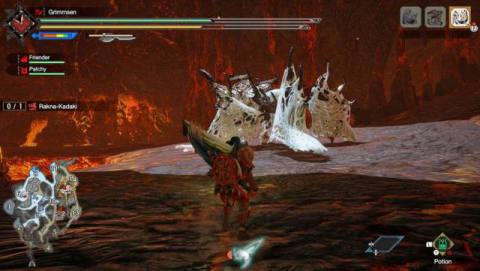 As ever, gear up appropriately with good fire-defence gear for your fight against Rakna-Kadaki.

The best option for fire defence in particular is the Rathalos S gear that you can craft from the previous quest tier in the high-rank hub. Though, by this point you should probably be running a build that’s more suited to your weapon type or play style, just ensure you do not have a negative defence value against fire, for this one.

If you can, slot in the partbreaker skill, as it’ll come in handy for breaking its webbed armour state.

Then, craft the best ice weapon you can, some weapons have poor options for this at this point in the game, meaning you can also stick with whatever weapon just gives you the most amount of attack, so long as it’s not a fire-type weapon.

Then, eat for Dango Defender, Dango Medic and Dango Fire Res accordingly. The Rakna-Kadaki is quite a challenge this late on in the game, so be prepared with Cleanser, Max and Ancient potions, too.

When you first meet Rakna-Kadaki, it will be fully webbed up, with each of its legs covered. It can spit fire at you from an angle, meaning if you’re positioned to the left or right, keep an eye (or eight) on the monster’s head, it’ll peer towards you, and then engulf you in highly damaging flames.

You can wirebug away from this attack, and we recommend doing a few rolls just to make sure you get rid of the fire, too. From there, it will attempt to swipe you with it’s legs, and crush you, should you be underneath it. 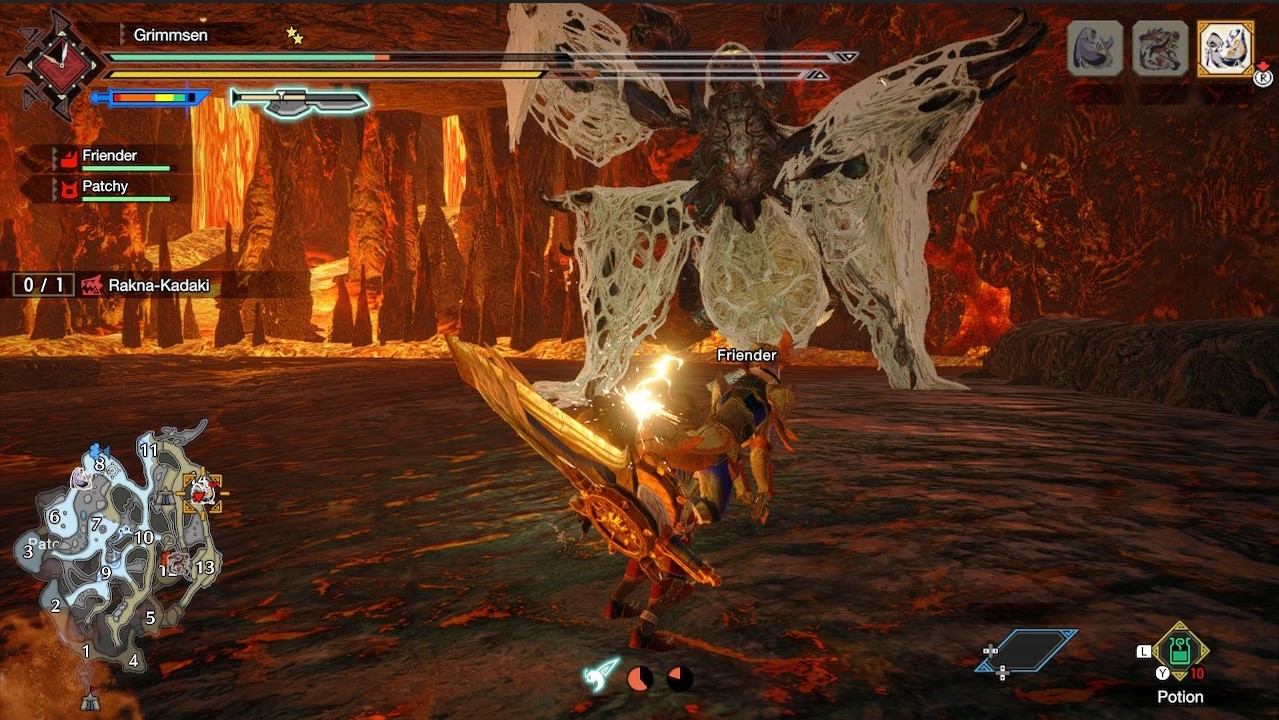 We recommend running to each of its legs, moving between them to keep Rakna-Kadaki from hitting you with its flame attacks, this can be pretty tough, so we recommend taking a mobile weapon that has an attack that can ignore roars and has armor as a switch skill.

Rakna-Kadaki can then also begin a multi-web beam, which can cover you in webs, even at a distance.

You can use a cleanser to get rid of this, or wait for your Palico or Palamute to free you from this. While you are trapped, the Rakna-Kadaki can also summon forth Rachnoids from its egg-sac, to pull the monster forward at speed, and then attempt to crush you, or hit you with one of its other attacks.

The monster has an additional attack where it will hang from the ceiling and spew fire in a circular pattern across the arena, this is a fairly easy one to dodge, and when it’s done, it’ll just come back down to the ground. Use a flash bomb to get it down quicker and open yourself for a small window of damage whilst it is toppled.

If you stay near the monster for too long, it also has a fire area of effect attack. Luckily, this has a fairly long windup time, meaning that you should be able to evade away from it pretty swiftly.

If you are hit, however, expect a huge amount of damage. Take a moment to recover with a Mega, Max or Ancient potion and keep hitting Rakna-Kadaki in its legs until you begin to break its webbed armour. This is where the Partbreaker skill comes in particularly handy.

When the webs have been broken, Rakna-Kadaki will slump over onto the ground, and begin to weave a solid egg-sac, which is its next main weak point. Use attacks that pinpoint its behind, and attempt to dodge its attacks when the sac comes crashing down on you.

It is still able to use all of the attacks from the previous phase, but you might find that it will now launch smaller Rachnoids in formation to spew fire at you. Position yourself in between the Rachnoid fleet to avoid their flames, luckily, it has a pretty short range and is easily avoidable. 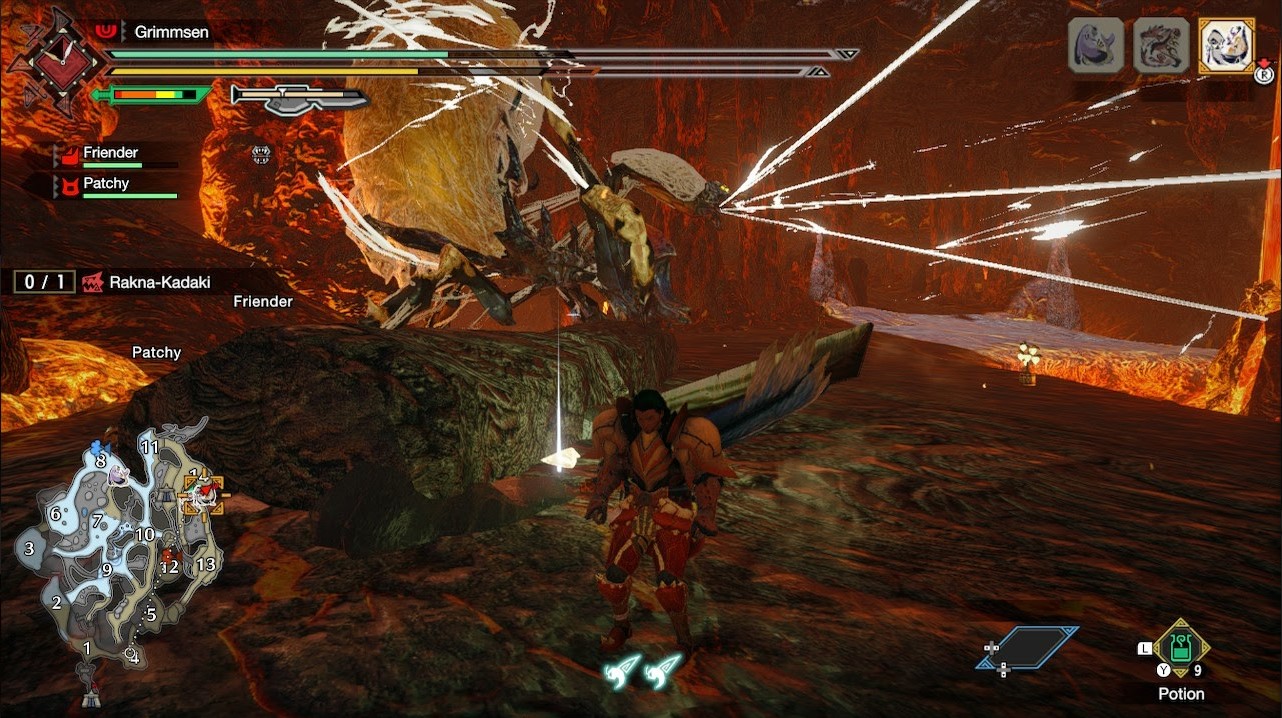 Rakna-Kadaki will also gain a flame spewing attack, where it marches towards you, just position yourself, or wirebug out of the way of it’s march, as the fire will always be spewing at an angle.

In addition to this, it will also have one bigger web beam, which is highly damaging, and will also trap you. You’re quite susceptible to being dizzied here, so be sure not to take too many consecutive hits in a row. The web beam is easily avoidable, so once again, rely on your handy wirebug to get away and use a cleanser.

Once the egg sac has been broken, Rakna-Kadaki will rinse and repeat these two forms. Just keep focussing on breaking the webs, and then the egg sac to alternate between them. This monster is really tricky, and can easily catch newer players out due to the way it moves, and it’s sheer size.

This monster is only weak to Ice, but resistant to Poison and Blast, so be sure to only pick up an Ice weapon, or failing that, a weapon of any other element or blight.

However, you are always at a distinct advantage using Ice, and you should be able to create a decent high-rank one by this point in the game. You can also just go in for raw damage, and gear yourself and your skills appropriately.

We can’t stress how much easier this fight is made with a skill that has armour and can ignore roars, so if you have the capacity to use one of those, do so, as you’ll be able to ignore a lot of the Monster’s large hitboxes with that particular switch skill.

How to farm Rakna-Kadai and get the Carapace, Silk, Glowgut, Spike, Monster Broth, Drone Substance and Queen Substance

You are able to attain everything from the Rakna-Kadaki with relative ease, given how often you’re going to be breaking parts. Like we mentioned in the previous section, partbreaker is incredibly useful, just be sure to not use a blast weapon on this particular monster as it is resistant to blast buildup.

Having a blunt weapon is also a distinct advantage, as you will be able to crush its head and abdomen a lot easier, so Hammer and Hunting Horn mains shouldn’t really break a sweat while farming this monster.

Everything else is easily attained through either breaks, or carves. The only part that you might have trouble with is the Glowgut, which is not attainable as a capture reward, but its dropped as a broken part reward, and a carve reward.

Be sure to make use of Wyvern Riding against this monster where you can, as it will drop a few more shinies than usual, which are the only way to get the Drone and Queen Substance materials.

They’re fairly rare, but if you go for KO’s by using a blunt weapon to its head, or by using flash bombs, it should make life a lot easier. You can also make use of a trap mid-hunt to reach the KO threshhold when it breaks out, meaning that you can follow up with an additional topple, should you manage to do enough damage.

Again, Hammer and Hunting Horn are the way to go when fighting this monster, and it’s pretty tough. Best of luck!