This Leviathan-type monster can blast you with foam, inflict you with the incredibly frustrating Bubbleblight ailment, and can rip hunters to shreds with it’s ballistic bubble blasts.

But, we’ve sussed out the best way to beat Mizutsune in Monster Hunter Rise.

How to Beat Mizutsune in Monster Hunter Rise 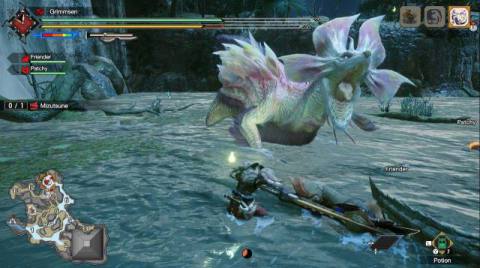 As one of Monster Hunter: Generations’ Fated Four, the Mizutune can be a pretty cunning monster to take down in the main game. Though, at this point, you should have already beaten Magnamalo.

If you’re reading this and you’ve not crafted your Magnamalo weapon yet, go and do that first, as it’ll come in handy during the Mizutsune fight in the “Waltzing by Moonlight” quest.

Got your Magnamalo weapon that dishes out some blast damage? Perfect. This should be the best weapon you can use against Mizutsune currently.

This slippery Leviathan is actually somewhat weak to both Blast and Lightning damage. However, at this point in the game your Magnamalo weapon should be the weapon that can dish out the highest amount of damage.

Then, equip yourself either with the Royal Ludroth armour set for water resistance, or another set of armour that gives you a decent amount of Water resistance.

Remember to also eat at the canteen before a hunt and choose Dango Water Res in order to bolster your water defense. While you’re here, also grab Dango Defender and Dango Medic to further boost your survivability.

We’re not quite done preparing yet. Be sure to pick up some Cleaner from the merchant, or craft them from a Fire Herb and a Popfish.

Now we’re ready to tackle Mizutsune. In the Flooded Forest, Mizutsune should be milling around in area 2. Pick up the items from the box, and make a beeline for the area, picking up any boosts from endemic life along the way. 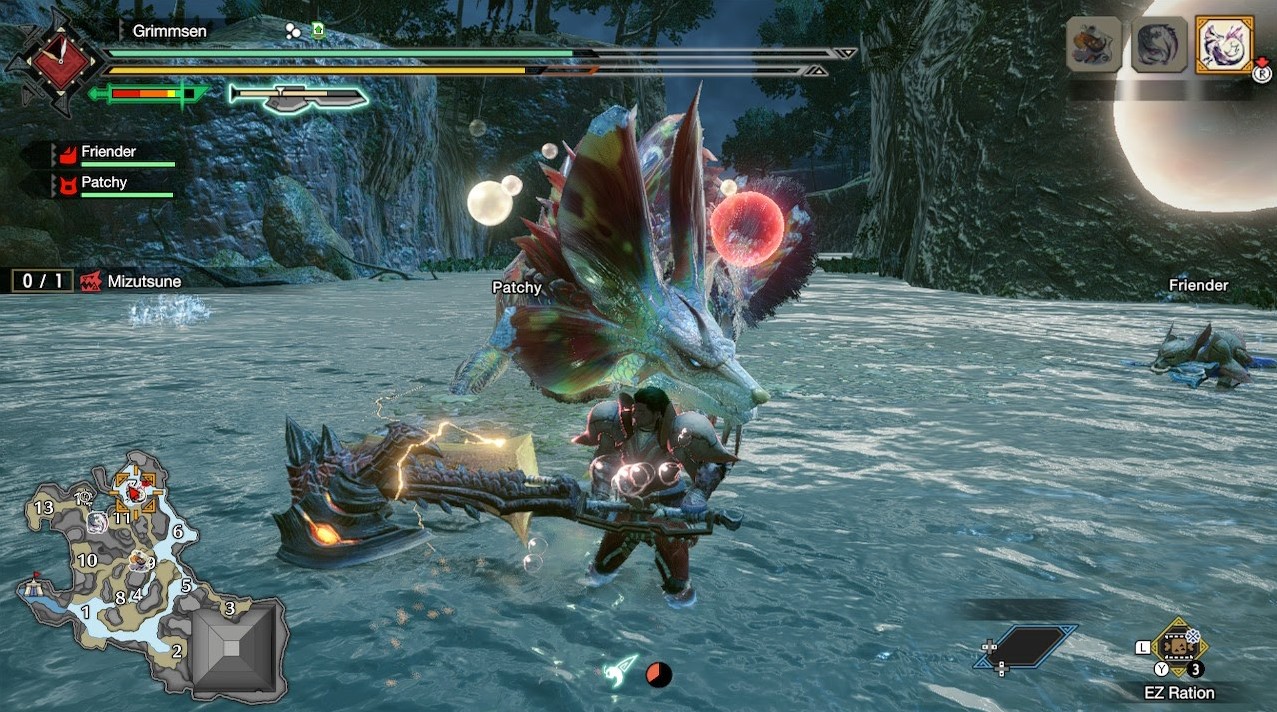 Once spotted, the Mizutsune will roar. At this point, if you’re using a Wirebug skill that ignores a roar, use that to dish out some extra damage and try to hit both front claws and begin to build up that elemental blast damage.

Dodge out of the way the moment you see Mizutsune begin to coil up, if you have a wirebug available, use ZL + A to quickly dash away as it lunges at you if you have your weapon out.

Once there’s a bit of distance between you and the monster, it will begin to coil up and disperse a flurry of bubbles.

If you get hit by one, it’ll inflict you with Bubbleblight. This will make you slide across the arena and also prevent you from using your wirebug, or items, aside from a Cleanser, which will get rid of it.

Luckily, you’ve either brought your own Cleanser, or picked them up from the box at the start of the quest! In addition to these two, you’ll also have a single Green or Red bubble during these flurries. Don’t worry about walking into these, as the green one will restore your health, and the red one provides you with an attack buff.

Once this Leviathan is really angry, it’ll blast you with a water jet as it also moves across the arena. There’s not really much to do here aside from dodge the attack as quickly as possible by putting your weapon away and doing a dive (press B while sprinting).

Alternatively, you can also look for some cover, or use your wirebug to evade upwards, if you make it in time. Afterwards, head straight back in to dish out some damage. In general, it’s head and tail are the most susceptible to damage, so try to aim for those, if you can. Going for the head can also net you a KO on the monster.

Mizutsune can also hit you with it’s tail as it repositions itself, but if you focus on the tail with slashing damage, you can cut it off for a free carve. 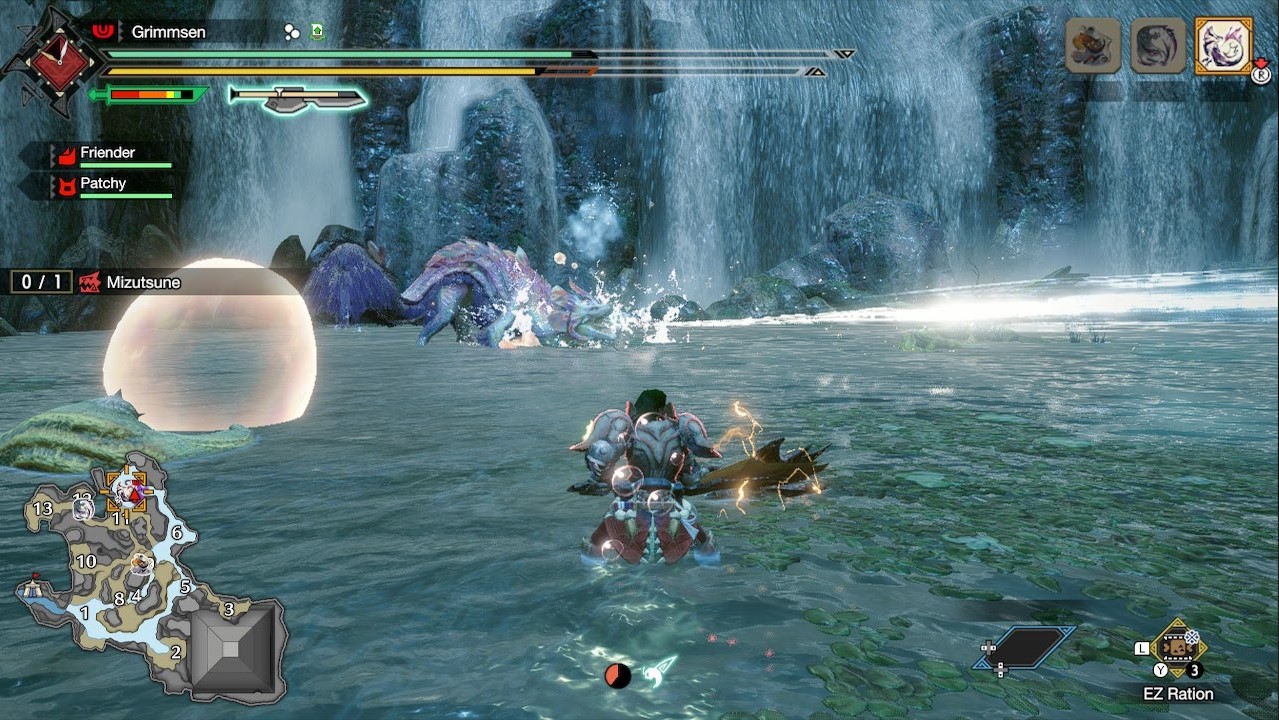 The Mizutsune is weak to both Blast and Lightning, so go into this fight with either a Magnamalo or Zinogre weapon to make use of these weaknesses. Just be sure to not mistakenly bring in any water element weapons, as they’ll be incredibly ineffective because Mizutsune is resistant to the water element.

How to farm Mizutsune and get the Plate, Fin, Tail, Bubblefoam and Claws

The best thing to do with Mizutsune or any other monster for that fact is to equip yourself with the Partbreaker skill, found in some armour sets and charms.

From here, you want to again equip a weapon of the Blast element, which Mizutsune is conveniently weak to, as that’ll do additional part breaking damage. Go for the head, claws and tail for the extra drops and carves.

Bring an extra trap if you’re having trouble with getting the head break. Then, once it’s limping, trap the Mizutsune and you should have the most amount of items possible from this monster. Just be warned that you won’t get any Claws from trapping the monster, and your best bet is to break those front legs.