In Monster Hunter Rise, you can find the Goss harag in the six star village quest named “Abominable Snow-beast”.

The Fanged-Beast monster spits and freezes its own arms to become deadly icicle-blades and rip you to shreds. Did we mention he can somehow do a wide ground area of effect attack and also shoot an ice beam at you? All while nerfing the effectiveness of your wirebug with Iceblight.

He is a nasty boy. Don’t fret, because we’ve found the best way to beat the Goss Harag in Monster Hunter Rise.

How to Beat Goss Harag in Monster Hunter Rise 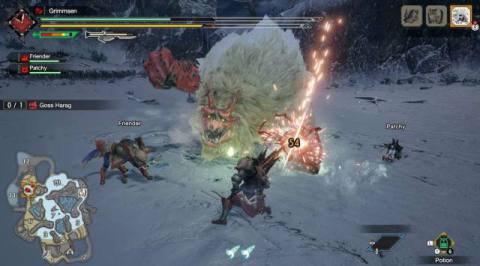 Goss Harag is one intimidating beast, if it could even be called a monster. This yeti-type creature can be absolutely devastating to unprepared hunters, so the first thing to do is to craft a weapon with a fire element.

At this point in the game, you should be able to craft some decent Rathalos weapons. Failing that, you should have access to something in the Aknosom Tree, too. This should set you up with a decent amount of fire elemental damage, which the Goss Harag is weak to.

Next, considering the Goss Harag has a suite of Ice attacks that can easily deplete your health bar, without the right care is to craft a set of armour in the latest tier with a good level of ice resistance.

The Barioth gear is a good option, but if you have a set of armor from the next tier of monster, such as Rathalos or Magnamalo, that should provide enough protection from the Goss Harag’s icy blades. 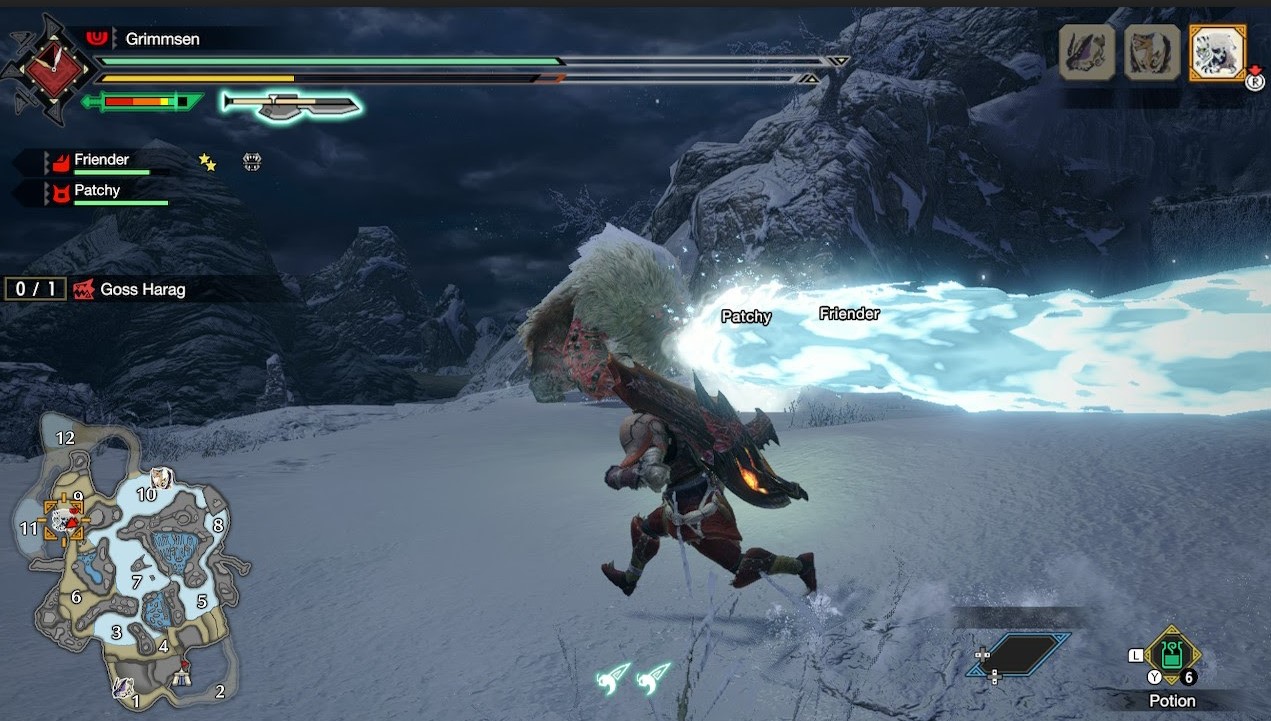 In terms of other preparation, you’re going to want to pick up some Nullberries, as they’ll come very handy if you get hit by some of the monster’s attacks. Next, eat Bunny Dango for Dango Ice Res, Dango Defender and Dango Medic, all of which will significantly increase your survivability while out in the field.

When getting out into the actual quest, the Goss Harag can either be found in area 7 or area 2. Regardless of which area it’s in, pick up any buffs along the way, and as you first attack the Goss Harag, it’ll roar.

Use an attack that can ignore a roar (if you have one with the Wirebug) or roll through it. Then, Goss Harag will launch into a full-frontal assault against you. It can thrash around using its arms, and also leap to another side of the area, and proceed to launch a frontal area of effect attack at you that goes in a straight line.

This can easily be avoided by either dodging horizontally, or by using the Wirebug to miss it by heading to the skies.

Goss Harag is fairly easy to predict in this phase, and won’t kick out an overwhelming amount of damage. He is fairly quick, so be sure to use your Wiredash and Wirefall (ZL + B) if you get caught in any of its attacks.

When its arms begin to glow red, you should start to worry. In this form, Goss Harag will begin to use his ice-element attacks. This includes his ice beam. Goss Harag will leap in a similar fashion to his ground area of effect attack, but this time do either one or two ice beams.

The first ice beam will always be directed at Goss Harag’s primary target, so we recommend trying to close the distance, or get behind the monster to avoid it. It is also possible to avoid the ice beam using the Wirebug, but it requires some very slick reactions.

The second beam will have Goss Harag slowly aim it horizontally throughout the arena, giving you ample time to dodge out of the way without too much difficulty.

The real danger starts to come when you see Goss Harag spit on its arms, creating ice blades, while enraged. He can start off with a single arm, slashing towards you and towards the ground.

The arm is actually the best place to hit Goss Harag here, so we recommend targeting that part of him during these flurries, as you will manage to easily hit his arm. If Goss Harag swings down towards the ground, his ice-blade can get stuck, giving you a prime opportunity to strike back.

The monster is also able to get two ice blades when it becomes enraged. The best way to deal with this is by paying close attention when his arms go back and in for a flurry of attacks. This will dish out a significant amount of damage, so run away when this happens. 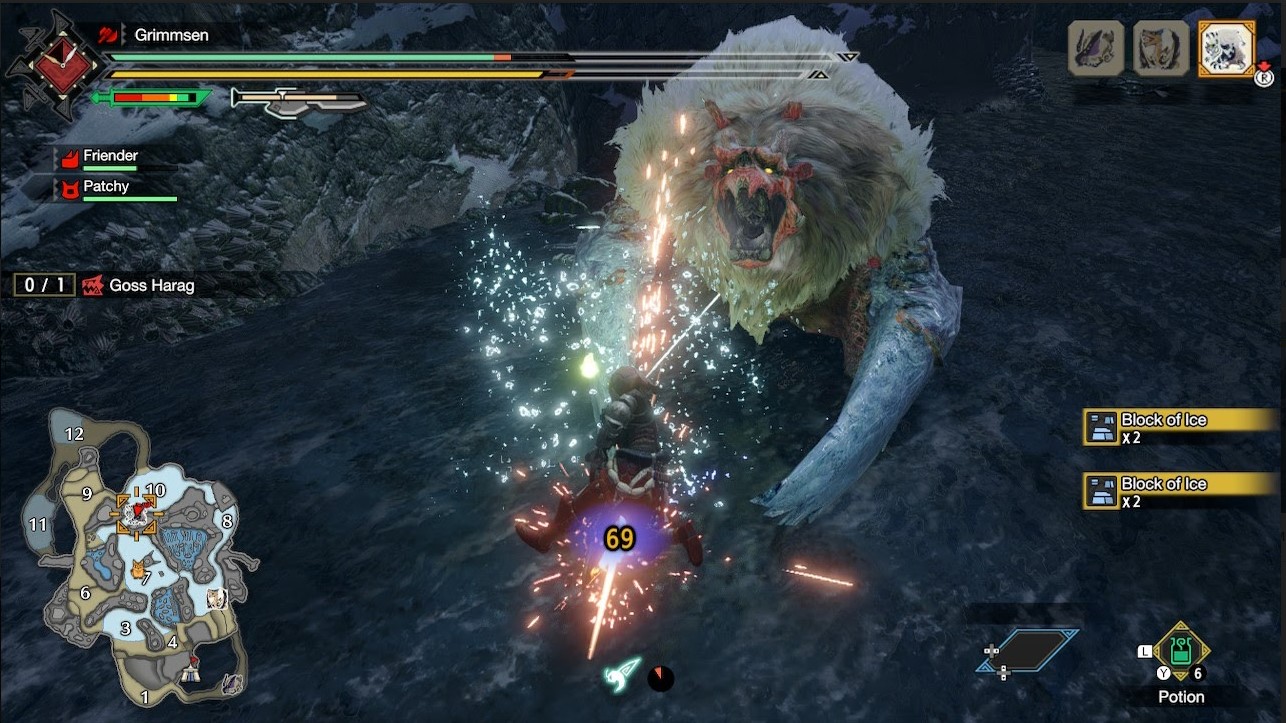 The best thing to do would be to go in with your fire weapon and attempt to shatter the ice blades. However, this might take a while to do. We actually recommend using a shock trap mid-hunt just to get some extra hits in on the monster with the ice blades exposed.

Once shattered, Goss Harag will have been toppled, and give you a window to dish out some significant damage, So long as you keep focussing on the head and forearms, you should have no trouble.

This monster is incredibly aggressive, and any of its ice moves will inflict iceblight on you, meaning that you wirebugs will recover slower, and have reduced range, too. Just keep an eye above your health bar and use nullberries to heal this blight.

If you’re unfortunate enough to get caught in the ice blades, use a max or ancient potion to recover quickly, as the Goss Harag certainly doesn’t mess around, and can easily send you back to camp with a follow up attack if you’re not careful enough.

Blast and Fire are both similarly effective against Goss Harag’s devastating attacks. Meaning that if you want to go for extra part-breaks, blast is the way to go.

For getting its actual limbs broken, we recommend fire instead, as it will dish out more consistent damage to a particular area, such as its arms, which will be particularly helpful in this fight.

Be sure to avoid any exhaust type weapons, as they have no effect against the Goss Harag.

How to farm Goss Harag and get the Fur, Hide, Brace, Claw, Horn, Frost Sac and Horn

Equip yourself with an armour set and charms with decent amounts of the Partbreaker skill, and use a blast-type weapon, which does additional part damage.

The best strategy here would be to first break its forearms, this should be especially easy if you use a shock trap as we outlined above, and then once those have been shattered, target its head in order to get the horn break, which is not attainable if you capture the monster.

You can only get the horn via a broken part drop, or a carve off of its corpse. You have a low chance of getting claws from a capture, so go for the forelegs afterwards for a break, and if you don’t get it from there, capture the monster. Each item is pretty easily attainable, with little in the way of plates or gems to grind out.