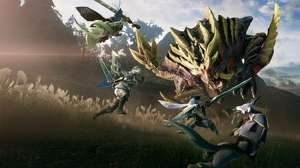 You’ll be familiar – perhaps even a little weary – of the ‘can you pet the dog’ question often asked of games these days, but Monster Hunter Rise has now set my expectations a little higher. Can you drift the dog in your video game? Because in Capcom’s latest beast-slaying epic, you very much can – and it feels bloody awesome.

Palamutes, rideable mounts with the lithe proportions of an oversized greyhound, are one of Rise’s headline additions, and in keeping with the maximalist design that’s so often defined Monster Hunter it’s not enough to just whisk you from one side of the map to another in record time. Here, it’s all about doing it in style. These things bound and dash, allowing you to sharpen your weapon or neck a potion as you’re in transit, and at the press of a button you can send their arse hanging out as your dog describes a glorious arc, in true Tokyo Drift fashion.

Maybe there’s an extension of the traditional Japanese theme that defines Monster Hunter Rise in there, somewhere. That theme is a bit more explicit in the Shrine Ruins area that hosts the recently-released demo; lower areas full of pampas grass to crawl through, while bamboo forests thick with endemic life seemingly modelled on various yokai, many of which can grant you various buffs, while at the heart of the map are those ruins for you to clamber all over.