All of the vendors in Monster Hunter Rise’s Kamura Village are useful in their own way, but The Argosy is the only one that can fetch you helpful items from far-flung locations.

However, the full potential of the system isn’t quite clear when you first gain access to Rondine’s shop. To clear everything up, here’s how The Argosy works in Monster Hunter Rise. 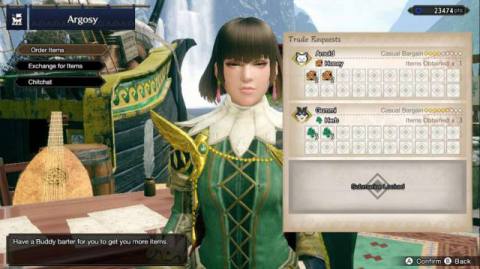 How does The Argosy work in Monster Hunter Rise?

In Monster Hunter Rise, The Argosy has two main functions:

In the “Exchange for Items” menu, you can trade the Kamura Points you collect from missions, side quests, and delivering transport items, for rare and difficult to obtain bits and pieces.

This includes ingredients for crafting, as well as trinkets for your house and other rare finds. 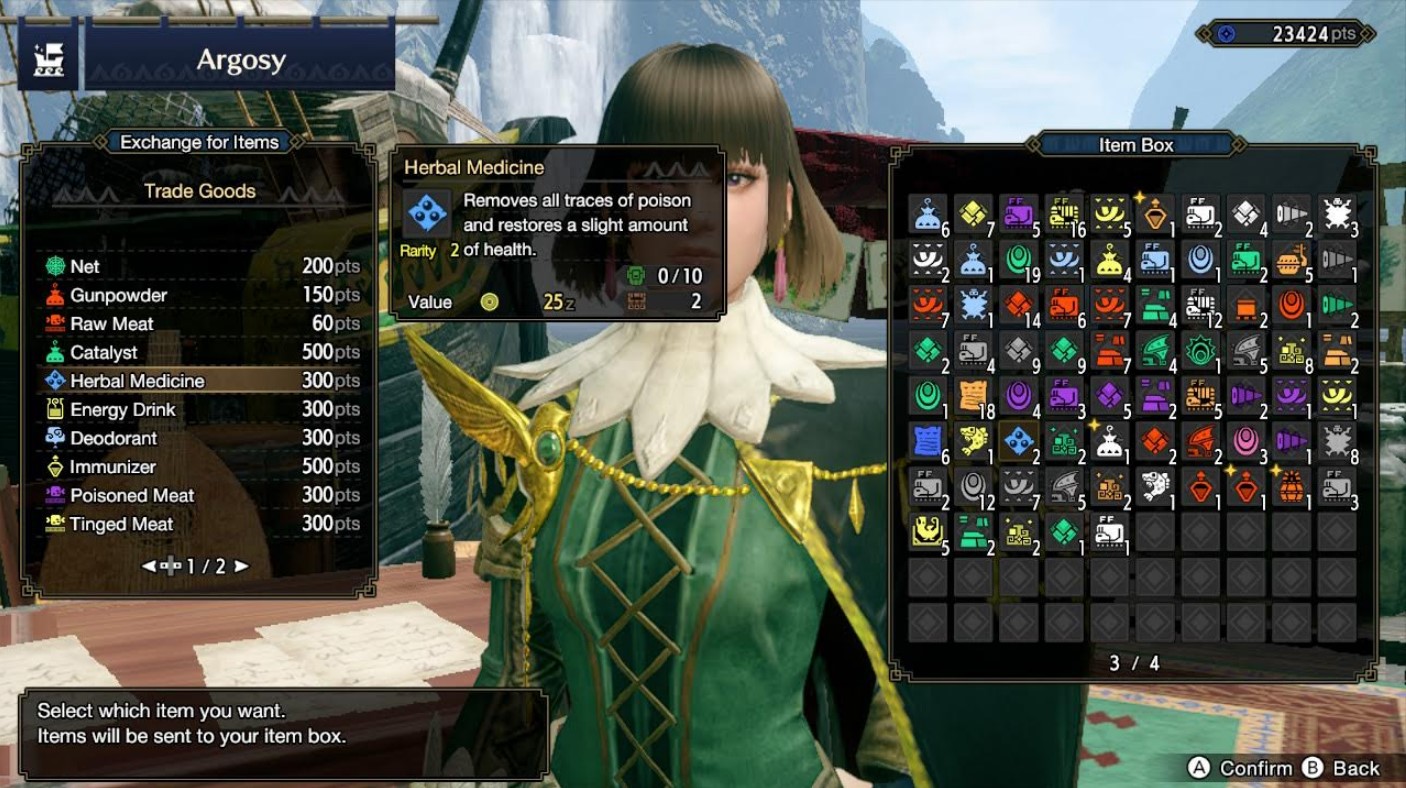 More interesting though is the “Order Items” menu. Here, you send Palicos and Palamutes on trade missions to distant markets to collect items for you. These are called Trade Requests.

This is a great source of commonly used items like Herbs and Honey, so check your crafting list and item box for things you need a constant supply of.

Remember: you can hire more buddies from Buddy Handler Iori – also in the Buddy Plaza.

To get your buddy to bring back more from their travels, you can select the “Buddy Bargaining” option when the buddies in question are about level 5 or level 15.

You can then pay a small amount of Kamura Points to give them a more effective bartering style and increase their yield.

Another thing to consider when you send out your buddies on Trade Requests is the market you send them to. 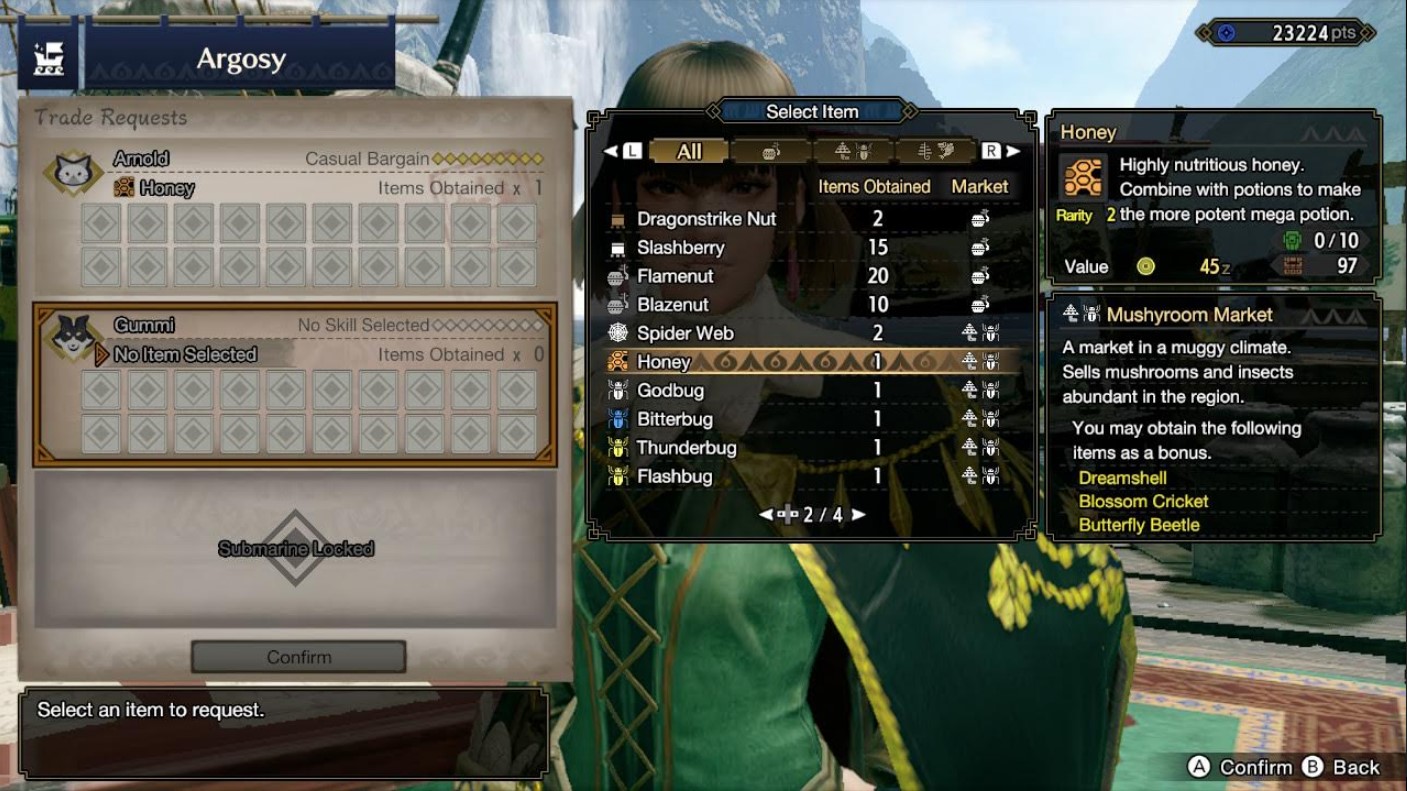 Occasionally, your buddy will bring back extra things with them – some of which you can make new weapons and armor with.

Those items include Dreamshells and Toxic Kumori, which unlock interesting armor pieces and weapons:

While you’ll start with just one slot in The Argosy’s menu, as you progress through the game, you’ll get side quests where you can unlock more submarines.

We’ll put together the following video showing you how to unlock all three submarine slots at The Argosy, but we’ll also write out the instructions too:

Where to find Wisplanterns and Boatshells for the first Argosy submarine

You can find Wisplanterns by doing any mission or expedition in the Shrine Ruins.

They’re found as a rare drop from Shimmering Red Berry gathering points. These points also give you Firelanterns, so you will probably have to visit a few to get the Wisplanterns you need.

You can find some Shimmering Red Berry spots to the left of the cliff edge right next to the camp spawn, on the right-hand side of area 1, in the second level of area 3, and in area 11 next to the nest where you get the Wyvern Egg.

As for Boatshells, these are found in the Frost Islands, where you have to search Oyster Beds.

Return to Rodine when you have what you need.

Where to find King Rhino, Rock Roses, and Bismuth Prisms for the second Argosy submarine

First up, King Rhino is found in the Flooded Forest, but you need to be in a high rank hunt.

Craft a barrel bomb before you make your way there, then ride over to the top of the pyramid and shimmy around to the blocked door around the back.

Use the barrel bomb to open the blocked door, then harvest the King Rhino from the Shimmering Rhino inside.

Next, Rock Roses are found in high-rank hunts in the Sandy Plains.

Search Desert Rose gathering spots to find them, which you can find to the south of area 10, and the north of area 12.

Finally, Bismuth Prisms are found in the Lava Caverns when you mine Iridescent Ore in high-rank hunts.

You can find these gathering spots on the surface levels of area 6 and area 10.