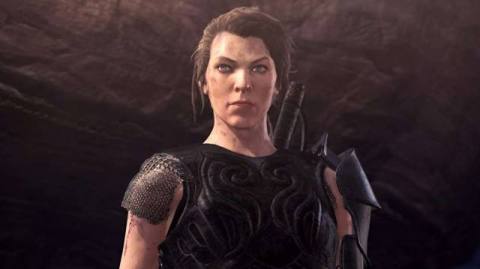 Paul W.S. Anderson’s Monster Hunter movie is, somewhat unbelievably, out next week, and to celebrate its whatever-the-opposite-of highly-anticipated-is arrival, Capcom is shoving its presence into Monster Hunter World: Iceborne, with a special crossover event.

Part one of the new side story, The New World, pits Artemis against a Black Diablos in the Wildspire Waste, granting the materials needed to craft the Artemis α+ armour set – which comes stuffed with a broad range of handy skills, including Earplugs, Health Boost, Stun Resistance, Great Luck, and Hasten Recovery.

Quest number two, To Our World, introduces a “special” take on the usual Rathalos battle, unlocking the Artemis Layered Armour for those that complete it. Capcom notes Artemis, as voiced by Jovovich herself, will be speaking in English throughout, while everyone else adopts the Monster Hunter language, to mimic the movie.

Anyone logging on from tomorrow, 26th November, at 4pm PST (midnight on 27th November in the UK), will also be gifted the one-per-player Special Item Pack. This include 30 Ancient Potions, 30 Dust of Life, 10 Golden Eggs, 3 True Armour Spheres, and an Earplug Jewel+, for those hunters in need of supplies. Both the Special Item Pack and movie Event Quests will remain available until 2nd December next year.

As for the Monster Hunter movie itself – which also stars Ron Perlman, Meagan Good, Diego Boneta, TI Harris, and Ong-Bak’s Tony Jaa – that launches in the UK on 4th December, and was looking markedly more like Monster Hunter in its most recent trailer showing.