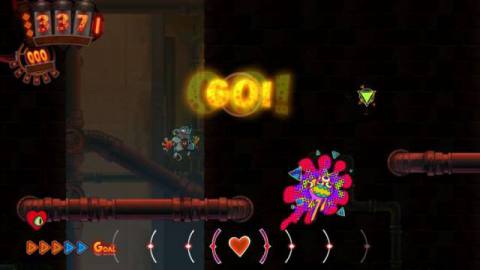 There’s one thing that really stood out to us when we started getting to grips with Mad Rat Dead: this game is cool. Everything about it, from the stylish visuals to the sublime soundtrack, screams attitude, and the devs have done a remarkable job in conveying this feeling without going overboard. If you’re a sucker for rhythm games, then you’ll definitely want to check this one out.

You play as the titular Mad Rat, who, after being subjected to a number of devastating lab tests, is sadly dead. All’s not lost, though, as the bizarrely cute Rat God grants our anti-hero another chance to relive his last day on earth. He decides to spend it in the only way he knows how: by exacting revenge on the human who experimented on him.

Having another shot at life does come with a catch, mind. Mad Rat’s heart is in a fragile state and must pump to the rhythm of the music in order to keep ticking. This forms the foundation of the side-scrolling gameplay; in order to navigate the environments, Mad Rat must move to the beat of the music, dashing, jumping, and diving his way through each level with more style than a suited and booted Mafioso. He can also rewind time, undoing any mistakes that might be made during gameplay, which is great if you’re after something a bit more laidback.

Sticking to the beat of the music takes a bit of getting used to, but the gameplay is relatively simple overall: Hitting ‘A’ lets Mad Rat rock out some dance moves, propelling him along the ground; ‘B’ is the jump button, and ‘Y’ lets you slam down from a height. Utilising all three moves is key to keeping with the flow of the music; if you miss a beat, Mad Rat will start to flounder, and this often starts a chain reaction of mistakes as you fight to get back into the right rhythm. If you’ve played your fair share of platformers, sticking to a set rhythm won’t feel natural at first, but it won’t be long until you’re soaring through the game with style and grace.

Of course, a rhythm game would be nothing without great music, and this is really where Mat Rat Dead truly shines. The music is genuinely fantastic, and each level displays the title and composer at the start, should you wish to look it up elsewhere. If we had to complain, we’d say some of the slower tracks can really throw you off pace at first as you get used to the smoother tempo, but this is a minor quibble that didn’t really impact our enjoyment of the game.

With its wacky storyline and stylish graphics, Mad Rat Dead would be a confident platformer even without the rhythm mechanics. But with the help of an excellent soundtrack, it’s an experience that feels wholly original, even if it’s not the first game to blend the platforming and rhythm genres. It can be a tricky game at times, but with the help of the rewind function, it’s one that feels relatively breezy overall, letting you just sink into the music and bust out those sick moves.